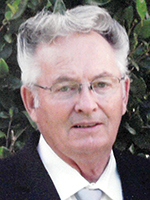 James Michael Smith was born Aug. 12, 1938, in Albert Lea, Minnesota, to Ambrose and Florence (Neist) Smith. He married Diann L. Schroeder on June 22, 1968. Jim was employed for over 40 years at Hormel, retiring in 2006. He loved riding his motorcycle, snowmobiling, cruising in his Corvette, going to car shows and snowmobile drag races. He also enjoyed watching NASCAR and wrestling.