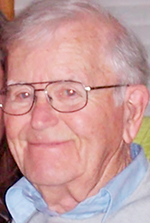 He was born Sept. 7, 1923, in Preston, Minnesota, to James and Julia (Farrell) Nolan. They moved to Austin when he was 5 years old where he grew up and lived out his life.

On Oct. 7, 1946, he married Judith “Judy” Lewis of Austin at Queen of Angels Catholic Church.

He served in the US Navy from 1942-1946 as a radio man. He worked at Hormel Foods until he retired in 1985 after 42 years. He was chairman of the Union Bargaining Committee for 14 years and was also a member of the American Legion and VFW.

Joe enjoyed traveling with his beloved wife, Judy, woodworking, golf (especially with his lifelong friend Butch Wise), fishing, pheasant hunting, and mowing his lawn. His greatest joy was spending time with his wife, daughter, granddaughters, great grandchildren, and all his nieces and nephews.

A memorial Mass will  be celebrated at 11 a.m. on Monday, May 15, 2017, St. Augustine Catholic Church with Father John Traufler officiating. Friends may call from 9:30 a.m. until the time of the service at the church on Monday. Interment will be in Minnesota State Veterans Cemetery in Preston with military rites by American Legion Post 91 and VFW Post 1216.

Mayer Funeral Home is in charge of arrangements. Condolences may be left online at www.mayerfh.com.