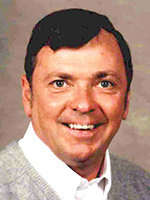 Jim’s wish and prayer were to stay in his country home, that Jim and his beloved wife Jackie built in 1958. Jim’s sweetheart Jackie died Sept. 1, 2016; she could only wait eight months to see her Jimmy again. Our parents never wanted to be apart.

Jim was born Dec. 28, 1934, to Evelyn and Rex Crowley in Chatfield, Minnesota. He married his sweetheart, Jackie Husemoller, on Oct. 22, 1955. Jim and Jackie were married at Our Lady of Loretto Catholic Church in Brownsdale, Minnesota, after returning from Korea. They have two children, Jane Crowley and Dan Crowley. Jim has three grandchildren that meant the world to him, Cody, Madison, and Emma Crowley.  Jim loved being with his grandchildren, enjoyed being outdoors, snowmobiling, skiing, collecting classic cars, and just being around people. He would never do anything the easy way; he loved an adventure and making a normal day fun.

Jim started Crowley Beverage in 1967. He loved his work, customers, and co-workers. Life down in the warehouse was never dull. The stories and fun that were experienced at the Crowley Beverage will never be forgotten. Our dad’s true joy was his work and driving the beer truck. Cody, and even the family dog, were invited on the beer truck for deliveries, trips to the breweries, and liquor warehouses. Our dad taught us how to drive anything with wheels and to go fast. Jim was always there for his kids and grandchildren and also all of their friends. Jim always helped people in need and always stepped in to help; he was the first one to pull someone out of the ditch or change a flat tire. Whatever his kids were doing my dad was doing it too, from moving the cows from one pasture to another, taking the boys dirt biking, or going for long walks in the woods. Jim believed in three things: hard work, prayer, and fun. Jim never ever gave up, even when he was so sick he would ask “should I give up?” Jim was a true fighter in what he believed in.

A funeral Mass will be celebrated 11 a.m. on Wednesday, May 3, 2017, at Sacred Heart Catholic Church in Hayfield, Minnesota, with Father Tom Niehaus officiating. Friends may call from 9 a.m. until the time of the service at the church on Wednesday. Interment will be in St. Michael’s Cemetery in Waltham, Minnesota, with military rites by American Legion Post 91 and V.F.W. Post 1216.

Mayer Funeral Home is in charge of arrangements. Condolences may be left online at www.mayerfh.com.