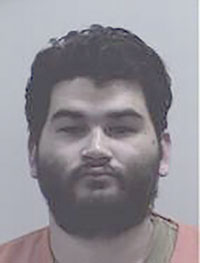 A 25-year-old Dodge Center man has pleaded not guilty to charges that he punched another inmate in the Mower County Jail and Justice Center and broke his nose.

According to court complaint, Schwering and the victim were released from lockdown in the jail around 12:30 p.m. on April 29, and shortly after Schwering pulled the victim into his cell and punched him multiple times before a detention deputy stopped the incident.

A deputy took the victim to the hospital, and X-rays showed he had a broken nose.

The victim said they were talking about disrespect when the incident happened.

Schwering indicated he was in a bad mood because he was missing a family event while in jail, and he said the victim made an offensive comment to him, which caused him to tell the victim they’d “settle it like men” after lockdown.

Schwering was in jail for being convicted of misdemeanor domestic assault in 2013. He’d originally been sentenced to a stayed jail term and probation; however, his sentence was amended on April 7 after a probation violation.