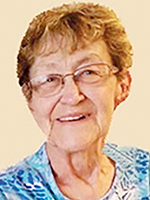 Jean was born on Aug.1, 1936, the daughter of Wilbert and Marion (Winn) Peterson in Hayfield, Minnesota. Jean graduated from Hayfield High School in 1954. She was united in marriage to Oscar Wollenburg on Oct. 23, 1955, at Trinity Lutheran Church in Hayfield. The couple resided on a farm near Brownsdale their entire married life. To this union they had six children, of whom four survive. Jean enjoyed cooking, baking, crocheting, watching TV game shows and cooking shows. Recently she did many word search puzzles.

The visitation will be from 4 to 8 p.m. Thursday, June 1, 2017, at the Czaplewski Family Funeral Home, 501 Second St. NW in Hayfield and one hour before the service at the funeral home on Friday.

The funeral service will be 1 p.m. Friday, June 2, 2017, at the Czaplewski Family Funeral Home in Hayfield with Pastor Randy Fossum officiating. Interment will be in Greenwood Cemetery in Brownsdale.