Hurdling to new heights: Packer trio has surged to success 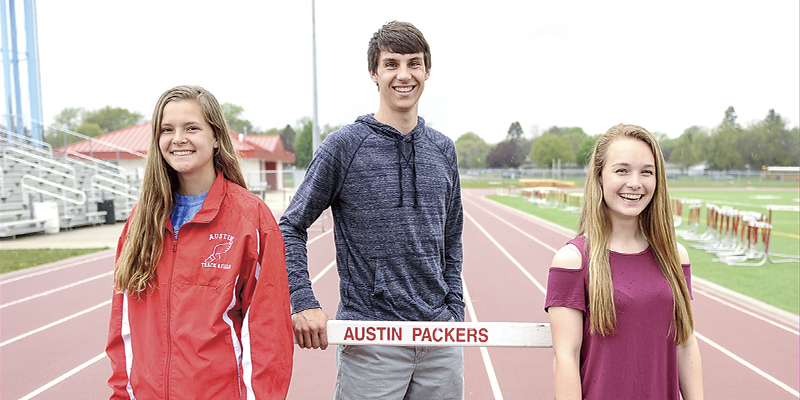 Austin hurdlers Taige Iverson, Trent Brown and Paige Raymond have been lighting the track on fire this season. Eric Johnson/photodesk@austindailyherald.com

The Austin track and field team is not short on competition when it comes to the hurdles and Trent Brown, Paige Raymond and Taige Iverson have shown that they can be force to be reckoned with as they have had a strong showing recently.

The Packers took first in the boys 110-meter hurdles relay and first in the girls 100-meter hurdles relay at the Cougar relays in Mankato East last week and Austin had six top-eight finishes between the four hurdles races at the ‘true team’ Section 1AA meet in Farmington Tuesday. The ‘true team’ meet usually gives the Packers a preview of the Section 1AA meet and the hurdlers are pleased with how the day went for them.

Raymond, a senior, had a big day as she was in the top-eight in both hurdles races Tuesday and she has excelled in the 300-meter hurdles all spring long. Raymond said watching Austin grad Rachel Quandt take ninth in the 100-meter hurdles in the Minnesota Class AA meet last season was a motivator for the whole team.

“I think [seeing her at state] made it possible for us, where now we could go too if Rachel made it,” Raymond said. “For all of us to make it in the top eight yesterday is a good sign that we can make it to the finals in sections and have a chance to make it state ourselves.”

Raymond has been to the state meet in gymnastics six times and she also played soccer throughout high school, but she now has a strong drive to finish her track and field career on a high note.

“Now it really feels like every meet counts,” Raymond said. “It’s winding down and I want to finish my track career the best I can.”

Brown, a senior, has had a solid spring in both hurdles races this season and he was happy to get the chance to run against some of the top hurdlers in the state at the ‘true team’ meet. 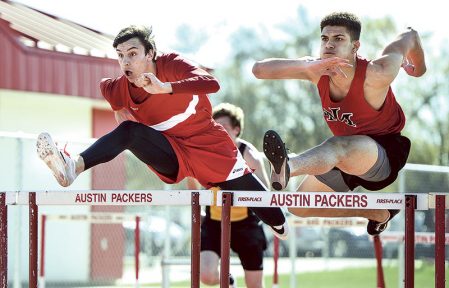 “There’s really some great hurdlers that we get to go against there, especially Evan El-Halawani from Lakeville North [who won both races],” Brown said. “He’s been in the state meet and it’s good to be able to race against guys like him, because we don’t always get the competition we’d like to see.”

Iverson, a sophomore, is already making some big waves on the track as she was able to pick up the hurdles fast last season while running behind Quandt, who now runs at the University of South Dakota, and Raymond.

“Last year running against Rachel, she helped a lot and so does Paige. Especially in the 300s, because I’m not very good at those,” Iverson said. “I’m kind of used to [big meets], and it was good race against the faster girls to see what sections will be like this year.” 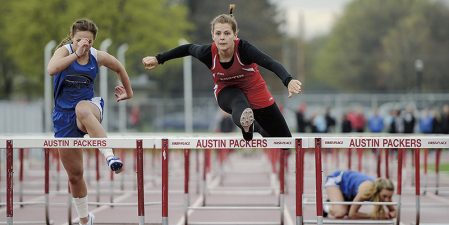 Raymond recalled Iverson being a force as soon as she crashed onto the varsity season last year.

“She kind of joined hurdles half way through last season and it was like ‘wow,’ this little freshman is really good at this,” Raymond said.

While Brown doesn’t race with Iverson and Raymond on meet days, the trio have developed a strong bond during workouts and practice. They’re always pushing each other to get faster and they’re supportive of each other on meet days.

“We really like to support each other as we race and we always make it a priority to see how everyone did if we’re not competing at the same meet,” Brown said. “We don’t have very many meets left so we’ll be giving it our all for conference and sections. Hopefully our motivation will really pay off come section time.”

Brown has made big strides himself this season and he credited that to the amount of time he’s put in over the past few years.

“A lot of reps have gone into practice over the years and I’m getting more comfortable every time I go over a hurdle,” Brown said.