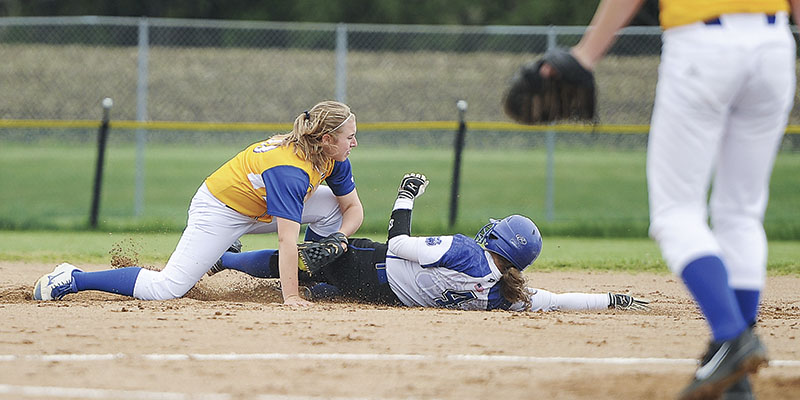 Hayfield second baseman Kyal Heydt tags Janesville-Waldorf-Pemberton’s Emily Budach on a stolen base attempt in the second inning of their playoff game in the Section 1A West Division Tournament in Hayfield Wednesday. Eric Johnson/photodesk@austindailyherald.com

HAYFIELD — After a regular season that saw them struggle offensively at times, the Vikings have cranked it up to full throttle in the Section 1A West softball tournament. No. 1 seeded Hayfield won its second straight postseason game in just four innings as it beat No. 4 Janesville-Waldorf-Pemberton (7-14 overall) 16-1 in Hayfield Wednesday. 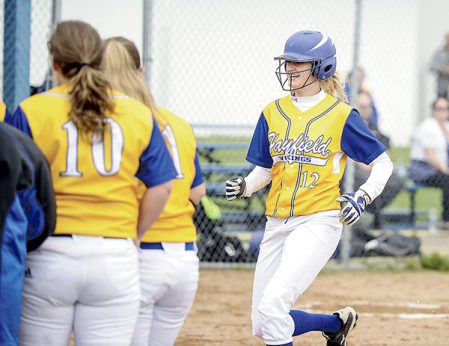 Hayfield’s Maggie Streightiff trots home after her first-inning homerun against Janesville-Waldorf-Pemberton in the Section 1A West Tournament Wednesday in Hayfield. Eric Johnson/photodesk@austindailyherald.com

Hayfield (15-6 overall) tacked on 11 runs in the first inning as Maggie Streightiff launched a two-run homer and Kelly Johnson knocked in two runs with a bloop single and it cruised from that point on.

Hayfield has racked up 34 runs in its first two postseason games.

“We have to have an attacking mentality,” Streightiff said. “When we come with that attitude, we play a lot better. We knew JWP was a solid team that can hit, so we knew we had to come and attack.” 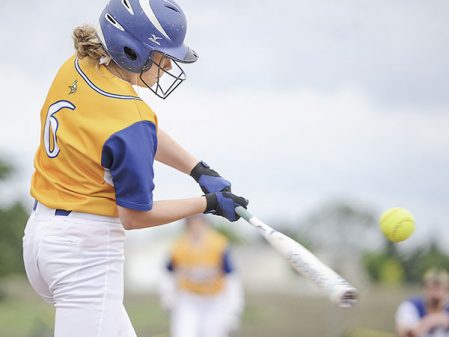 Hayfield’s Lexi Dudycha turns on a pitch during the Vikings’ Section 1A West Tournament game against Janesville-Waldorf-Pemberton Wednesday in Hayfield. Eric Johnson/photodesk@austindailyherald.com

Hayfield eighth grader Caitlyn Hendrickson allowed just one hit to pick up the win in the circle and Kyal Heydt belted out her third homer of the postseason when she hit a two-run shot to center field in the second inning. Heydt said the Vikings are gaining their confidence as they pursue their third straight trip to the Minnesota Class A state softball tournament.

“We peaked at the right time,” said Kyal Heydt, who had three RBIs. “Our bats have been on fire lately.”

Hayfield will move on to the Section 1A West title game, where it will square off against No. 3 Blooming Prairie 4:30 p.m. Friday in Todd Park.

“We’re just going to take it one more game at a time. Hopefully we’ll do our best,” Heydt said. 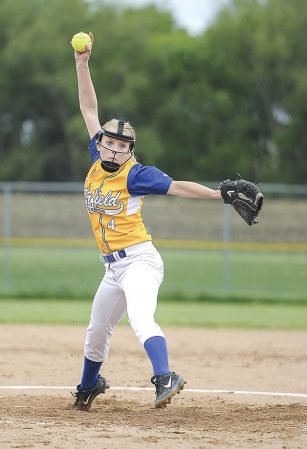 Hayfield’s Caitlyn Hendrickson pitches against Janesville-Waldorf-Pemberton in their playoff game in the Section 1A West Tournament Wednesday. Eric Johnson/photodesk@austindailyherald.com 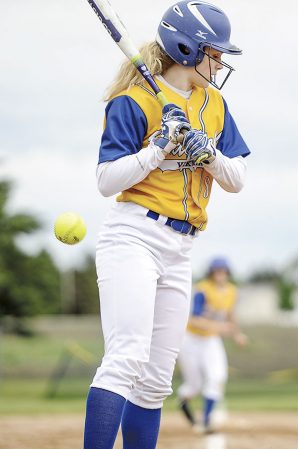 Hayfield’s Olivia Matti is hit by pitch during a Section 1A West Tournament game against Janesville-Waldorf-Pemberton Wednesday night in Hayfield. Eric Johnson/photodesk@austindailyherald.com