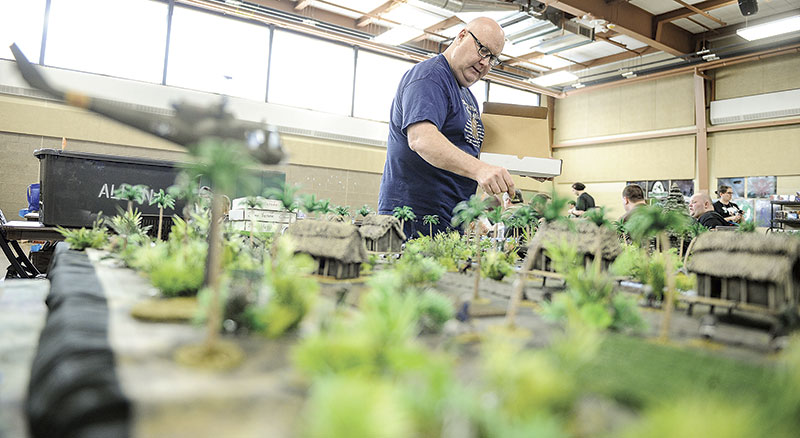 David Allen, of Rochester, puts out pieces for a game called “Tour of Darkness.”

David Allen of Rochester, a retired IBM-er, has been gaming a long time, ever since he inherited a number of games from a relative 40-some years ago.

Today, he continues that passion and on Saturday, at the second annual Austi-Con, he was game master for “Tour of Darkness,” an elaborate board game that, in this case, is set against the Vietnam War.

“My dad was military; I’ve always gotten into the military games,” he said, as he viewed his set-up of the Tour, waiting for gamers to join. 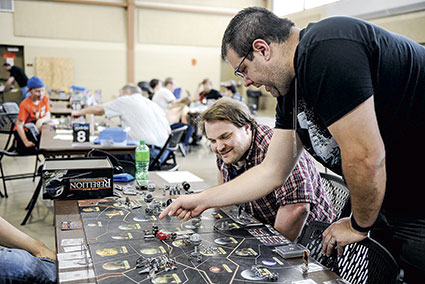 He probably did not have long to wait. The three-day event, organized by MIchael Jordal and his wife, Kate, held at the Austin Armory, drew over 160 by Saturday afternoon. Jordal said those numbers would most likely increase through Sunday, since about half of those attending the three-day event were walk-ins.

Allen said the “golden age” of gaming is in full flower. A lot has to do with its social component, he said.

“There is that social aspect you just don’t get with video games,” he added.

He added the internet may be the cusp upon which many gamers jump to tabletop. The isolation of just playing internet or video games is gone with tabletop games.

“It’s connected people who you didn’t know existed; and, pretty soon, everyone is letting others know (through social media)” where the conventions are. People are talking with people they only knew through the internet,” he said. 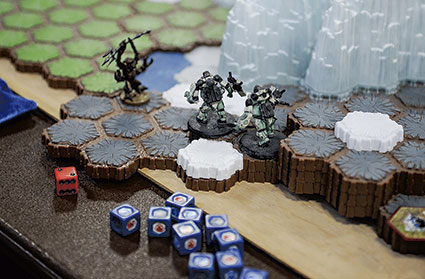 Pieces are laid out for a “Heroscape” tournament.

Todd Olson of Minneapolis has been gaming for over 40 years, he said, as he packed up a military game that featured the 1755  Battle of Mohangahela in the French and Indian War — a far cry from the sometimes-fantastic characters featured in some games.

“Well, it’s colorful, and I enjoy history — and, it’s politically safe,” he said with a grin. “I mean if I run into a French royalist here, I’ll eat my hat.”

The mortgage banker, like Allen, is a longtime gamer, who has seen trends come and go. He knows if this particular set-up wasn’t attracting a lot of people, the next one would be. That evening, he planned to set up “Night’s Black Agents” — whose focus is Jason Bourne fighting Dracula.

Role-playing games continue to be favorites, he said.”And, we’re noticing a lot of Eurogames gaining in popularity, too,” referring to the largely German-style games that emphasize strategy and are more abstract.

Olson said the gaming floor is a great leveler — “you see all walks of life” come to conventions. He believes the rise in tabletop gaming was simply a matter of economics. You can spend $50 on games “and you’re playing them for the rest of your life.” 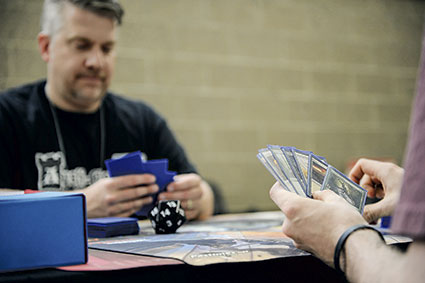 Travic Dockter fans his cards out during a “Magic: The Gathering” game with Jason Egginton, both from Rochester.

He also said there was a general stereotype attributed to gamers early on, but these days, he said, “the culture is much more accepting” of anyone interested in gaming.

“I went to a con in Buffalo (Minnesota) and it drew 150 on New Year’s Day — on New Year’s Day! That’s crazy, in little Buffalo.” On the other end of the gaming spectrum, he said, he has attended Indianapolis’ Gen-Con, which draws as many as 65,000.

Jordal said he believes gaming has grown in popularity in reaction to the highly-technical world.

“I think people need, at times, to disconnect,” he said, adding that the event this weekend brought out all ages with all interests, and he plans a third event in 2018.

Allen said he thought the event was “great.”

“It’s bigger than last year; it’s noisier — which means people are enjoying it,” he said. 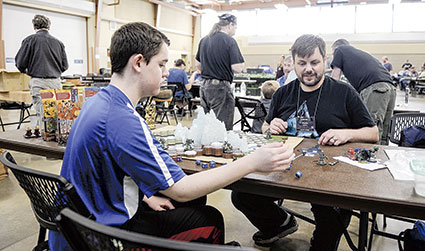 Nate Faiman of Rochester, right, and Hunter Weber of Eagan play a game of “Heroscape” at Austi-Con Saturday. Eric Johnson/photodesk@austindailyherald.com