Fruits of their labors: Packer boys tennis is seeing good things coming from the hard work on and off the court 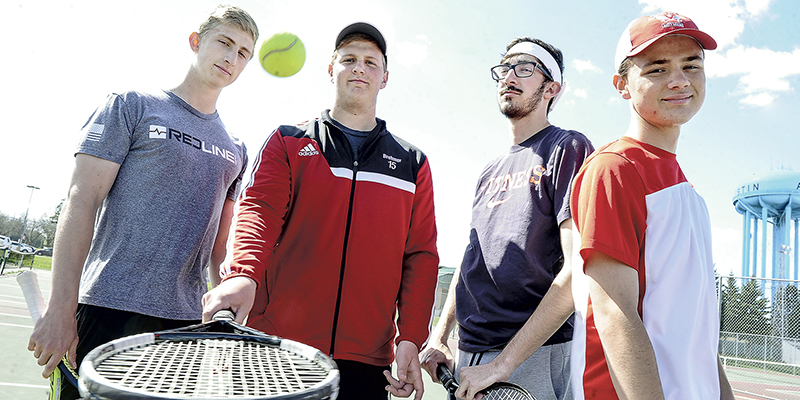 Austin Packers tennis captains Jens Ourada, from left, Josh Brehmer, Noah Kremin and Todd Weaver have been leading the team through something of a resurgance this season. Eric Johnson/photodesk@austindailyherald.com

Over the past few years, the Austin boys tennis team has been a little young and, at times, a little overwhelmed. But this season has seen the Packers grow up on and off the court as the squad is staying competitive and thinking positive.

Austin currently has a match record of 5-6 overall as it has two conference matches remaining before it competes in the Big Nine meet in Rochester Saturday. Austin head coach Jeff Anderson said the team’s improved play and attitude has come from the leadership of captains Noah Kremin, Todd Weaver, Josh Brehmer and Jens Ourada.

“The team attitude is great, with guys being encouraging to one another, guys being willing to do what is necessary to make the team better in spite of what they personally may want to do,” Anderson said. “Their work is off the charts this year. Whether it be conditioning, drills or playing matches these students are working everyday. They are putting in extra time on their own even during the season.”

Ourada, Austin’s No. 1 singles player, has played with the Packers since he was a youngster and he’s made some big strides this season on the court, along with the team.

“We try to make practices as fun as possible and I think this year most of our new guys are having a lot of fun, so hopefully a lot of them will return next year,” Ourada said. “For me, the competition’s gotten a lot better, but I feel I’ve gotten a lot better too. As you keep moving up, you keep having challenges that you have to overcome. It’s been a good few years.”

Brehmer has given the Packers a big boost at No. 2 singles as he’s won the majority of his matches this season. He’s hoping the Packers can continue their solid play as they move towards the Big Nine Meet.

“I try to come into each match with a positive mindset and I have a plan to play out each point,” Brehmer said. “As long as I follow through with that, I’ve had pretty good success.”

A lot of Austin’s success is due the fact that the veteran players put in some time in the offseason to get better. Once the team started winning some matches, the work ethic began to spread like wildfire.

While the Packers have made waves on the courts this season, they’ve also had a big impact in the classroom. According to Anderson, the varsity team has a GPA of 3.485 and he has always stressed that the players are students first and athletes second.

“Academically this team is outstanding,” Anderson said. “They are a success in the classroom and on the court. This is something we pride ourselves on and the boys take to that challenge as well.”

Kremin has enjoyed getting the taste of some wins in his senior season and he said a lot of the success has come from a simple shift in mind set.

“I think a big thing this year was keeping an open mind set,” Kremin said. “We lost a few guys from last year, but we knew we could do better this year if we really put forth the effort.”

The Packers will host their final home match of the regular season when they play Owatonna at 5 p.m. on Monday.