Austin history, from the eyes of children 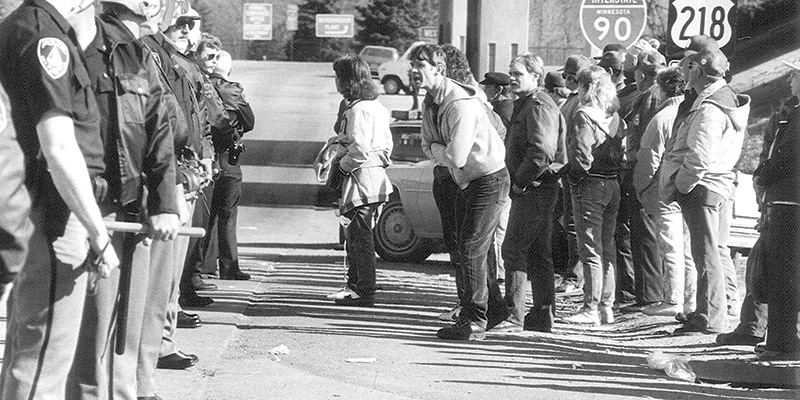 The Children’s Theatre Company of Minneapolis is looking for for austin natives for a play on the Hormel Foods Corp. strike of 1985. Herald file photo

The story of the 1985 Hormel Foods Corp. strike has been told in many ways: news articles, television pieces, books, an Academy Award-winning documentary and more. But now a Minneapolis theater company is looking to tell the story in a new way: from the perspective of children.

“We haven’t seen anything that looks at it through the lens of how it impacted the children in the community,” said Melissa Ferlaak, the theater’s senior communications manager at Children’s Theatre Company (CTC) of Minneapolis.

CTC is in the early stages of developing a play on the Hormel strike. Playwright Philip Dawkins and theater directors are looking for people willing to share memories and experiences to provide background and context for the play.

“The  Hormel strike was a moment in our history that impacted people profoundly,” said Ferlaak, who noted that impact stretched from Austin to the state and the entire country.

The theater leaders are especially interested in speaking with people who lived in Austin and were between the ages of 8 and 18 during the 1980s, as the play will aim to tell the story of the strike from the perspective of children who experienced it.

CTC wants to tell stories about the region, as Ferlaak referenced past plays that touch on youth hockey, farm families, Somali refugees in Minneapolis and more.

In 1985, P-9 union workers at Hormel voted — by an overwhelming 1,261 to 96 margin — to reject the company’s latest contract offer and go on strike after cuts were made to hourly wages and benefits. What resulted was a bitter, drawn-out labor dispute that drastically impacted the community, from workers who lost jobs to families that were torn apart by picket lines.

Despite the controversial topic — which still touches many emotions in Austin — Ferlaak said Dawkins and theater directors are just getting started on the piece and have no slant or angle.

In fact, Ferlaak praised Dawkins as a writer who tells healing stories that explore different identities and divisions, and she praised him for the care he gives his stories.

Ferlaak said they’re looking for the “full, unadulterated story” of the strike, and they’re hoping to get a variety of memories and experiences.

“This is research at this point,” she said. “It’s not on-record stories. We’re not collecting them and making a documentary.”

Ferlaak promised they’ll take stories with open ears and open eyes, noting they’re aiming to accurately portray the many facets of emotions coming from such an ordeal.

Anyone wishing to contribute can reach Elissa Adams, director of New Play Development at eadams@childrenstheatre.org or by calling 612-872-5134.

Dawkins and theater leaders will be available to meet with and talk to people between June 24 through July 8, and Ferlaak said they may come to Austin to talk to people. They’ll also be able to get peoples’ input via phone calls and emails.

At this point, the play is simply in the early development stages, which could take months to years, so Ferlaak said there is no timetable for when the play could hit the stage.

Dawkins resides in Chicago, where he teaches theater, and has written plays such as “Miss Marx: or the Involuntary Side Effect of Living,” “Einstein’s Brains” and “Failure: A Love Story.”

CTC is the only theatre focused on young audiences to win the coveted Tony Award for Outstanding Regional Theatre and has received three Tony nominations for its production of “A Year with Frog and Toad.” Learn more about the company at www.childrenstheatre.org.

The play is being developed with support by the Doris Duke Foundation’s Resident Playwright Program.