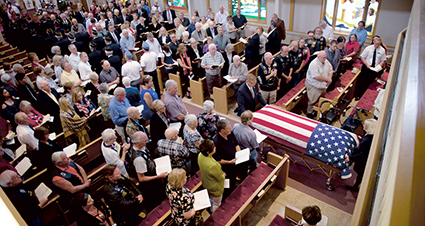 EMMONS  — A Minnesota sailor killed during the attack on Pearl Harbor in 1941 has received a hometown burial.

The Minneapolis Star Tribune reports that the remains of Navy Fireman 3rd Class Glaydon Iverson were laid to rest Saturday alongside his parents at Oak Lawn Cemetery in his hometown of Emmons.

His body was flown home last week, and he was buried with full military honors. 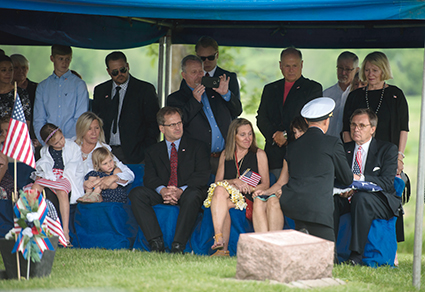 A flag in honor of Glaydon Iverson is presented to his oldest nephew, Gary Iverson, Saturday during his funeral service at Oak Lawn Cemetery in Emmons. Colleen Harrison/Albert Lea Tribune

He died at the age of 24 when the USS Oklahoma was hit by torpedoes and capsized while anchored at Pearl Harbor. His gravestone has an engraving depicting the ship where he and 428 other sailors died.

On Saturday, Patriot Guard Riders and other veterans groups lined the paths outside the church and at the cemetery. Members of the Navy served as pallbearers. Navy Capt. Daniel Pionk gave folded American flags to each of Iverson’s closest living relatives — his brother’s four children.

“It’s a celebration, but the emotions are catching up to us,” said nephew Gary Iverson, of Santa Fe, New Mexico, who wore a tie of swirling stars and stripes.

Jerry Thompson, commander of the Emmons chapter of the American Legion, said the American military is known for “’Don’t leave anybody behind’ — and it’s working.”