Exhibits of the land; Nature center visitors get a fresh look at the world around them with new exhibits 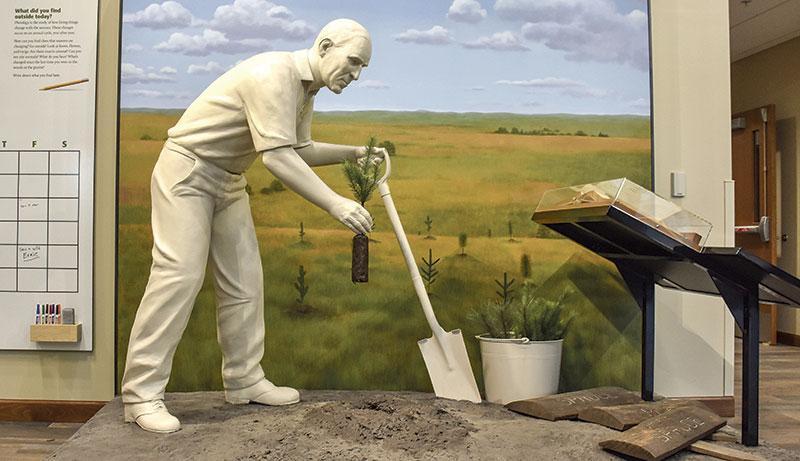 This story appears in the May-June edition of Austin Living.

Jay C. Hormel Nature Center staff have a challenge for you while touring the center’s new interpretive center: Try to spot all the critters in the exhibits, especially in the murals and inside and outside of a large cottonwood tree at the center of the exhibits. 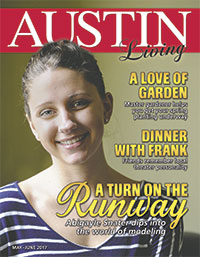 This story appears in the May-June edition of Austin Living.

Some will be easy to spot; others will be much more difficult, like a sculpted bat somewhere on the cottonwood tree.

“There’s a bat in a place where you can see it if you look very carefully,” Director Luke Reese said.

“Many of the sculpted animals are a little bit hard to spot,” naturalist Maria Anderson added.

“We really want it to be a connection to what they’re going to see out on the land,” Reese said.

The interpretive center aims to educate visitors about the forest, wetland and prairie of the center. 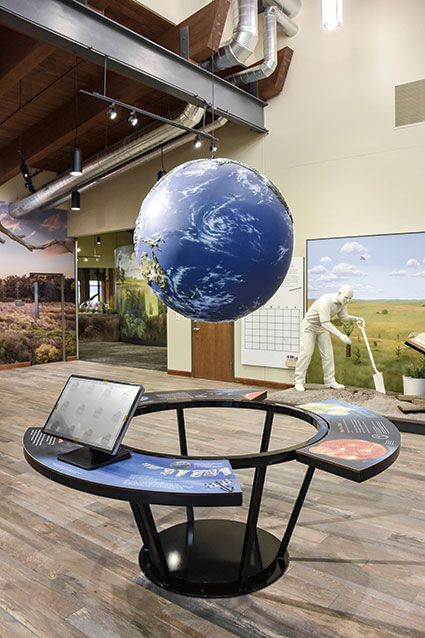 Immediately inside the new interpretive center is a small theater where a 10-minute video on the nature center will play when visitors hit a button. It will tell of Jay Hormel and his interest in nature and trees and how it led to him forming an arboretum that would eventually become the nature center. Beside that is a statue of Hormel planting a tree, along with information about “the man and his plan” in front of a painted mural.

In front of Hormel, a globe — which will turn 15 degrees once each hour to rotate completely once a day — will hang with a light representing the sun. Material around the earth model will provide educational details about the earth and the importance of the sun.

“We wanted to put the history of the earth in some perspective,” Reese said, noting that humanity on Earth is just a blip in a long history.

That ties in with a panel on climate change and how humans have affected the earth in a short period of time since the industrial revolution.

A wall on the east side across from a large fireplace thanks the donors who contributed a total of more than $1 million for the exhibits. 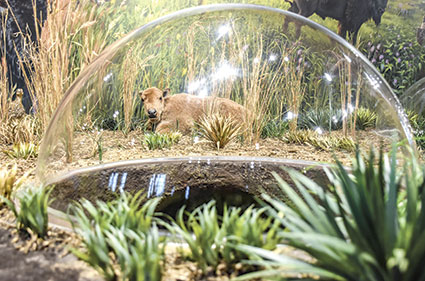 Reese estimates about 70 percent of the nature center’s land is prairie, so the prairie exhibit helps bring people up close and personal to the prairie.

A centerpiece is a painting that Split Rock Studios, the project’s general contractor, taken from the old interpretive center and expanded into a larger, curved mural.

“That mural is probably one of my favorite features of the whole exhibit,” Reese said. “It’s just a beautiful work of art.”

Below the mural is a sculpted prairie scene that people can crawl under, where roots are visible, and come up in the middle of the exhibit in two domes, like a prairie gopher or other critter might.

“I think that’ll be a favorite area,” Anderson said.

The exhibit will feature a taxidermied bison calf and other sculpted animals, along with information on prairie plants, their roots and more. 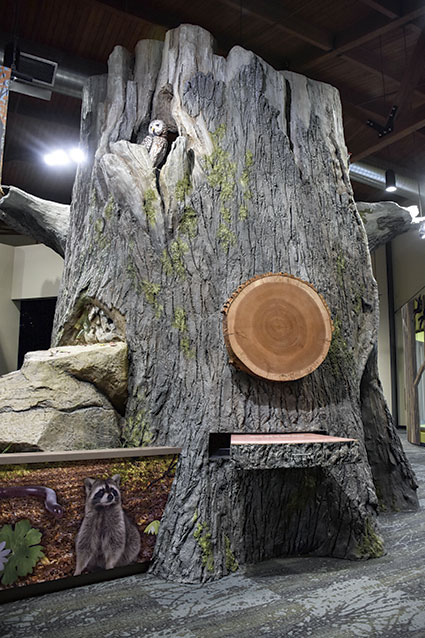 One of the centerpieces of the exhibits is a giant, sculpted cottonwood that visitors can go inside and hunt for that hard-to-find sculpted bat and other critters on the outside.

The tree stretches into other exhibits, like the forest exhibit, and features a turkey and woodpeckers on its bark and branches.

The tree also has a pull-out drawer that features tree rings and tells how to gauge a tree’s age. 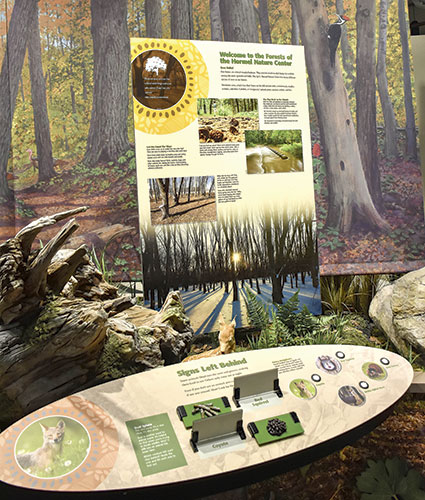 The forest scene is made to look like a branch has fallen off the large cottonwood. That branch features spots where the bark opens to show what’s under the bark of a tree.

The forest exhibit also features a mural and several sculpted or taxidermied critters to spot.

In that display, two terrariums will house the nature center’s snakes and salamander.

The exhibit also features other animal sounds and a scat-matching station, along with a taxidermied fawn and ruffed grouse. 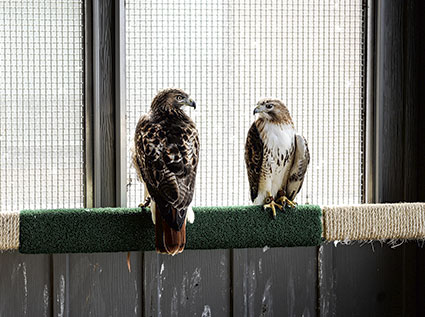 Two windows on the southwest side of the center will display Guka, the nature center’s barred owl, in one pen and two new red-tailed hawks, Sha and Wiyaka, in another area. The birds, all flightless after accidents or injuries, will be visible from the inside and outside, though blinds will occasionally be closed to give them privacy.

The exhibit will also feature a large, sculpted eagle talon and a machine that casts the silhouettes of birds on the wall or carpet, along with several educational panels.

Along the east and north walls of the exhibits, a geologic timeline depicting earth’s 4.5 billion years of history will be on display for visitors.

“That was pretty neat to work on,” Reese said.

Then around the center, other displays will discuss the nature center’s solar energy arrays, its energy-efficient light bulbs, its geothermal system, its low-water toilets and faucets, its bird glass — which features dots for birds to better see the glass — and more. 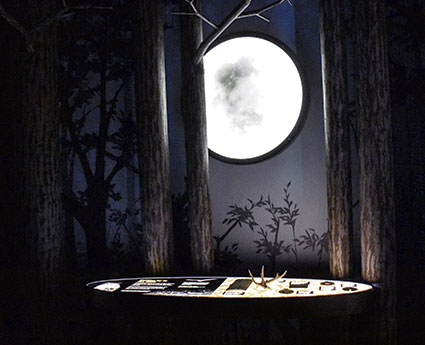 Creatures of the night

A creatures of the night exhibit gives visitors a taste of what it’s like to be in the center at night, which people can do each week since the center is open until 10 p.m.

Reese hopes it will help people past any fear or apprehension around nature at night.

Anderson calls this one of the featured exhibits, which was an idea of retired Director/Naturalist Larry Dolphin after he saw a similar exhibit at another center.

The exhibit features low lighting, night sounds of the nature center and sculpted critters. It also includes a lit moon and the Big Dipper constellation. Dolphin tells the story of the Big Dipper on a recording that can be played at the push of a button.

“His voice is literally in the building,” Reese said.

This exhibit will feature a large dragonfly head that people can put their own head inside to see how a dragonfly’s eyes see, along with informational panels on dragonflies. 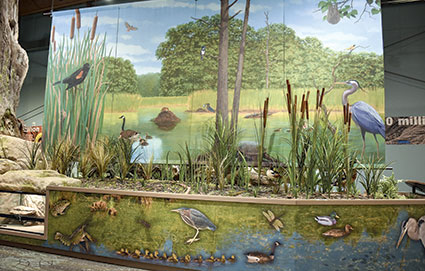 The wetland exhibit will highlight the macroinvertebrates children may encounter when scooping the pond, along with a terrarium with painted turtles, a mural of a pond scene and taxidermied ducks. The exhibit also features a large turtle shell people can sit on and crawl through, which staff say could be a favorite spot for photos. 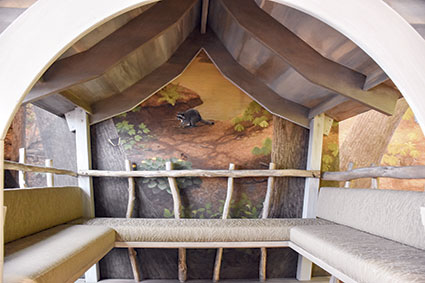 The new early childhood room is a gateway to fun for youngsters, and they can even enter through a hole in the door, which is designed to look like the bark of tree.

The room offers plenty of fun and educational exhibits, and a mural offers youngsters a chance to spot many painted critters, some from a treehouse built out from the north wall.

“Lots of critters and plants to look for,” Anderson said.

At a puzzle table, kids can put together and take apart a picture of a great blue heron and a deer. With the pieces on, it’s a picture of the two animals. With them off, it shows the skeleton of the animals.

A puppet theater stage will offer kids the chance to stage puppet shows, and there will be a spot where children can do Crayon rubs. A bird watching station features binoculars and information about commonly spotted birds by west-facing windows.

Dolphin’s presence is felt just outside the early childhood room with a picture and a quote he commonly used in his three decades at the center: “For the wild ones and the little ones.”

“This project wouldn’t have happened without Larry’s passion for this place,” said Reese, Dolphin’s successor.