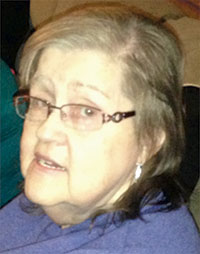 Evon Fay Downs was born June 14, 1935, in Austin, Minnesota, the daughter of Richard and Frieda (Douglas) Downs. She attended school in Austin. Evon married LaVerne Olson and the couple later divorced. She later married Robert Troester at the Little Brown Church in Nashua, Iowa. They made their home in Austin where Evon worked as a nurse’s aide at St. Olaf Hospital. Robert died in 2003. In 2016, Evon moved to Albuquerque to be near her daughter.

Survivors include her son, Verne (Norma) Olson of Dexter, Minnesota; her daughter, Joyce (Mike) Moore of Albuquerque; 10 grandchildren; 18 great-grandchildren; sister, Dixie Hanson of Austin; and nieces, nephews and friends. She was preceded in death by her parents; both husbands; three sons, Richard, Ray, and Kenneth; and three sisters.

Worlein Funeral Home is assisting the family with the local arrangements. Condolences may be expressed to the family online at www.worlein.com.