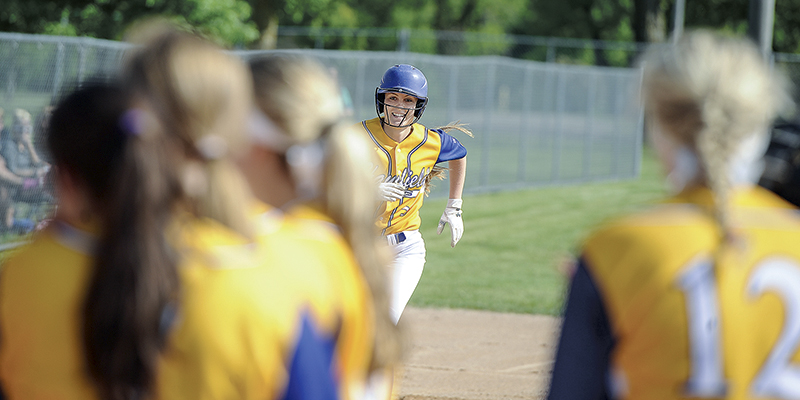 Hayfield’s Carrie Rutledge comes home after her three-run homer in the first inning against Blooming Prairie in the Section 1A West title game Friday at Todd Park. Eric Johnson/photodesk@austindailyherald.com

With a roster loaded with players who have state tournament experience, the Hayfield softball team is no stranger to Section 1A West titles. Now two Hayfield middle schoolers are quickly finding out that they just aren’t along for the ride, they’re part a big part of the show.

Hayfield used a battery of eighth graders at Caitlyn Hendrickson pitched to her long-time catcher Jenna Jacobsen and the Vikings beat Blooming Prairie 16-1 in four innings to advance to the Section 1A tournament in the Section 1A West title game in Todd Park Friday.

After BP’s Linnea Sunde singled and stole second base to start of the game in the top of the first inning, Hendrickson struck out three straight BP hitters as she allowed just two hits the rest of the game to pick up her second straight postseason win in the circle. 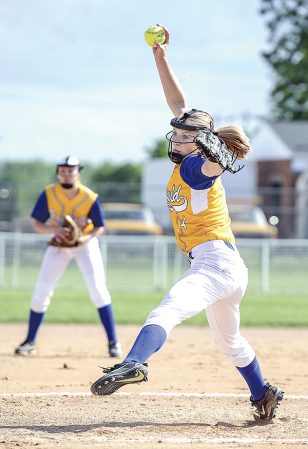 After Hendrickson escaped the early jam, the Hayfield offense took advantage of a two-out BP throwing error to jump out to an 8-0 lead. After BP’s miscue Kate Kruger delivered a two-out, two-run single and Carrie Rutledge added a two-out, three-run homer.

Hendrickson said she knows the firepower her team has as Hayfield has outscored its first three postseason opponents 50-2.

“I try to pitch the best I can to get us back in the dugout so we can do our thing and get hitting,” Hendrickson said. “I feel like we have the best defense and I just like to get it across the plate and let them work.”

Jacobsen, who has been Hendrickson’s catcher since the pair were third graders, put the finishing touches on the win when she smacked a three-run triple into right field to activate the 15-run rule for the third straight game for Hayfield. Five different players had at least one RBI in the win for the Hayfield (16-6 overall), which will play Mabel-Canton in the Section 1A semifinals in Todd Park 5 p.m. Tuesday. 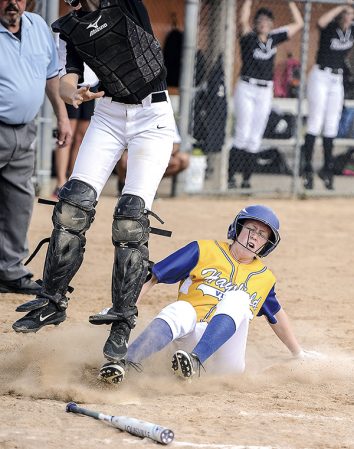 Hayfield’s Kate Kruger slides into home on a play at the plate against Blooming Prairie in the Section 1A West title game Friday night at Todd Park. Eric Johnson/photodesk@austindailyherald.com

“We have good hitters and better hitters, but once we get rolling as a team, there’s no stopping us. We’re really confident at the plate,” Jacobsen said. “It was a little bit different [for me playing in a subsection title game], but you’ve got to go into it confident like you would any other game. I was thinking of it just like another game, expect it was more important.”

Hendrickson has picked up her game in the postseason for the Vikings after she only received a handful of spot starts during the regular season. She’s finding her groove in the playoffs and she was quick to credit Jacobsen and Jacie Gustine, Hayfield’s other pitcher, for helping her along.

“I’m 100 percent confident that [Jacobsen’s] going to catch anything that I throw, no matter how ugly it is,” Hendrickson said. “I think [the team] started to see how much work I’ve been putting in. I’ve been working my hardest just to see how far this team can go and I think we’re going to go a long way. Jacie’s a great a pitcher and I learned a lot from watching her. She’s been really helpful to me with everything she’s taught me. She’s been really supportive.”

Hayfield head coach Jana Wagner likes where he team is right now and she’s not worried about her squad becoming complacent after it has advanced to the last two Minnesota Class A state tournaments.

“I think if we come out hitting the ball, we’ll be OK,” Wagner said. “Caitlyn keeps improving. She has good movement on her ball and she knows when to throw the change up.” 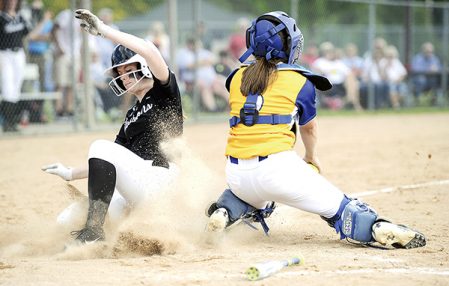 Maya Lembke had the lone RBI for BP (15-8 overall), which committed three errors in the loss. BP will take on Faribault Bethlehem Academy in a Section 1A elimination game in Todd Park 10 a.m. Saturday. 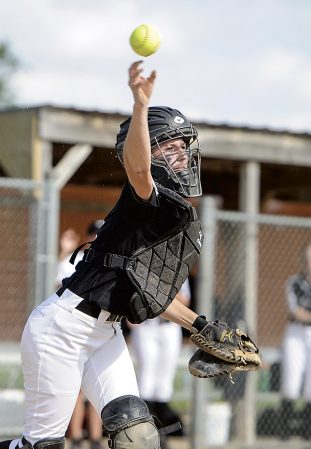 Blooming Prairie catcher Maya Lembke fires down to first in the first inning against Hayfield in the Section 1A West title game Friday night at Todd Park. Eric Johnson/photodesk@austindailyherald.com