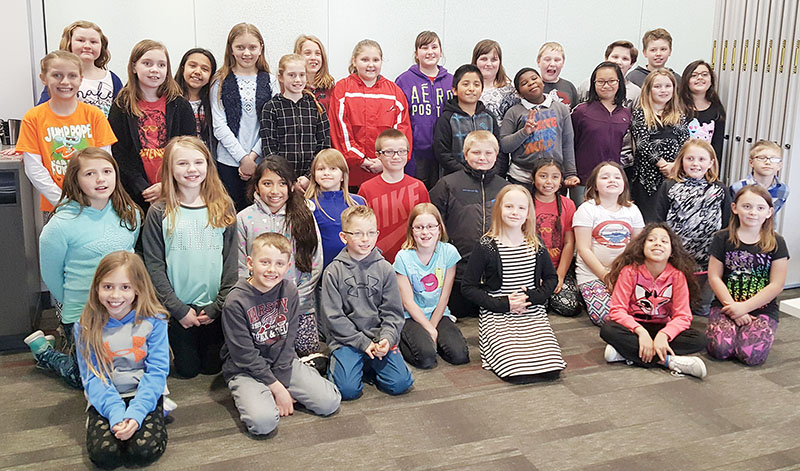 Assisted by the Science Fair Mentoring Project, 34 third and fourth students from Banfield and Neveln elementary schools in Austin traveled to Mankato on April 29 to participate in the regional science fair. Photo provided

By Carolyn Bogott, For the Herald

Assisted by the Science Fair Mentoring Project, 34 students from Austin traveled by chartered bus to Mankato on April 29 to participate in the regional science fair.

The group was made up of third and fourth graders from Neveln and Banfield elementary schools who received blue or purple ribbons in the local STEAM (Science, Technology, Engineering, Arts, Mathematics) Expo.

This year the Science Fair Mentoring Project worked with 48 students at Neveln and Banfield Elementary Schools from November until the STEAM Expo on Feb. 24.

Twenty-nine mentors volunteered 450 hours to help the students complete experiments, as well as to prepare poster board explanations and oral presentations of their projects.

Jake Vela, Banfield Success Coach, says “Students have reported a greater sense of confidence in other areas like math, working cooperatively with a partner, and using the computer. Also students have developed great relationships with their mentors.”

Shelly Weinmann, teacher at Neveln tells of a student who is from a family who is not financially able to afford supplies for a science project.  This student’s parents have several children and so they have little time to spare to help.  Throughout the Science Fair Mentoring sessions,  Weimann says she watched this student’s determination to follow the scientific process to complete their project.  “The student even had a partner who quit, but continued on working hard.  The student ended up getting a blue ribbon.”

This program started with an inspiration on the part of Catherine Haslag, Riverland chemistry teacher. She wanted a way to help more students in third and fourth grades enter the science fair.

She observed some students didn’t have adults to support them in preparing their entries and surmised that others never got to the fair because of lack of adult support. Her first steps were gathering together a steering committee of others who were interested, and garnering the support of the Austin AAUW branch.  Soon she had many other community supporters. And over the last three years, 167 different students have been mentored for participation in the local STEAM Expo.

The Science Fair Mentoring Project also teamed with the Austin Library under a grant provided by the Library Services and Technology Act this winter and sponsored four Science Saturday experiences and two classes to help parents learn how to support their children in completing science fair projects.  This was another effort to increase students’ interest in science and encourage greater participation in the Expo.