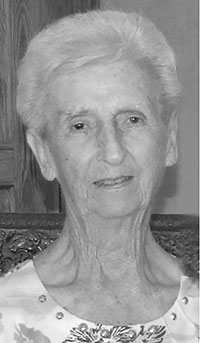 Donna was born July 4, 1934, at Stacyville, the daughter of Paul and Rose (King) Huemann. She graduated from Visitation High School in 1952. On May 5, 1956, Donna married Gene Wagner at Visitation Catholic Church in Stacyville. She was a very active member of Visitation Catholic Church. Donna enjoyed bowling, dancing, traveling, and trips to the casino. She was also an avid sports fan. Most of all, Donna was a devoted wife, mother, grandmother and great-grandmother. She loved cooking and baking for her family, and will be remembered by her grandchildren for making the best chocolate chip cookies. Family gatherings to celebrate her Fourth of July birthday were always very special times for Donna and her family.

She was preceded in death by her parents; her husband, Gene Wagner in 2016; her son, Paul Anthony Wagner; two sisters, Bernice Hackenmiller and Darlene “Pooch” Mayer; and two brothers, Leon Huemann and Larry Huemann.