Cross country Spam; The Spam Tiny House of Sizzle is now on tour 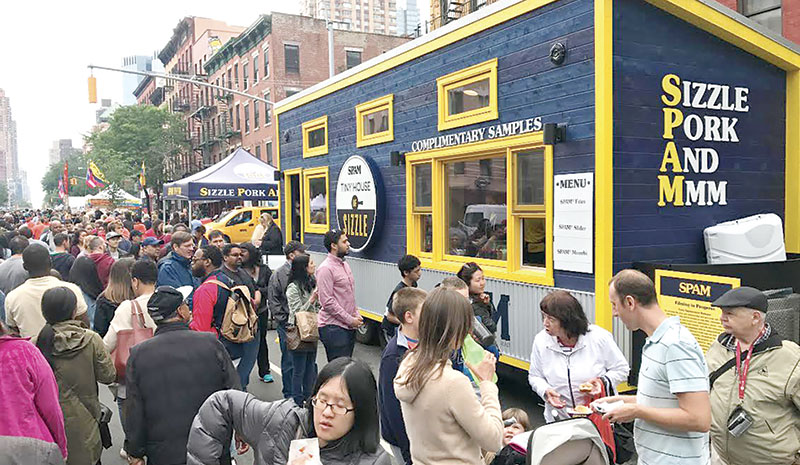 Over 8,200 Spam samples were given out at the Ninth Avenue International Food Festival in New York.

The Spam Brand is once again crossing the country on another food tour aimed at those who have never tried Spam.

But instead of a food truck, as in the previous “Spamerican Tour,” people can enjoy Spam in a tiny house.

In creating the new tour, Spam Brand managers asked what it was about the Spam experience that caused Spam fans to love it so much.

“The one moment that they all truly identified with is that moment when the Spam is sizzling in the pan and it starts to get that mahogany color on the outside,” said Spam Brand Manager Resha Hovde, who referred to it as “the sizzle moment.”

Hovde said the idea for the tiny house came about because people primarily eat Spam at home. 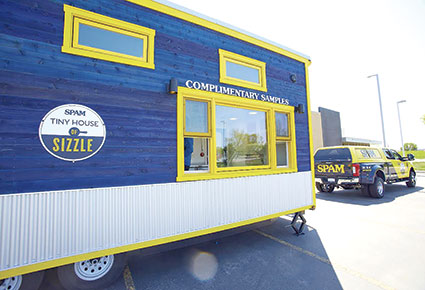 The Spam Tiny House of Sizzle is stopping at 12 locations across the country. Photos courtesy of Hormel Foods

Thus, the Spam Tiny House of Sizzle was created.

Hormel Foods Corp. booked actress — and Spam lover — Jamie Chung (“Gotham,” “The Hangover” sequels) as their tour spokesperson. She was present with the tour when it kicked off at the Ninth Avenue International Food Festival in New York on May 20 and 21.

Hormel Foods also reached out to chef Jordan Andino, executive chef and owner of Invite Only and 2nd City West Village in Manhattan. Andino, who has competed on shows like “Beat Bobby Flay” and “Chopped,” includes Spam items on his menus. For the tour, he created a Spam breakfast burrito that Hovde described as “refreshing.”

“[Andino] and Jamie Chung love their Spam being combined with fresh vegetables,” she said. “[The breakfast burrito] has hash browns, eggs, avocado, fresh salsa and tomatoes.” 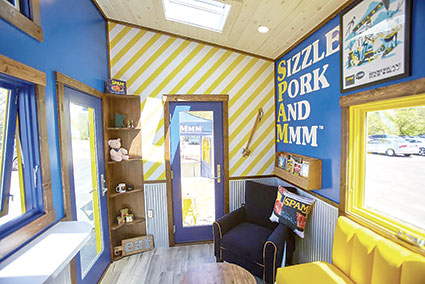 Inside the Spam Tiny House of Sizzle. Photo courtesy of Hormel Foods

Other items being served from the Tiny House of Sizzle are Spam fries, Spam sliders and, of course, musubi.

Hovde also said T-shirts will be available for purchase on the tour. All proceeds from the T-shirt sales will go toward Convoy of Hope, an organization that provides food for people in the wake of natural disasters.

The Spam Tiny House of Sizzle received a warm reception in New York.

“The lines were a block long and they never stopped,” Hovde said.

Hovde said they ran out of samples.

The Spam Tiny House of Sizzle will stop in several locations and festivals across the country before ending the tour in San Francisco on Aug. 9. It will be in Austin on July 4 for Freedom Fest.

“The big thing is to introduce Spam to people who have never tried it,” Hovde said. “We want them to experience that sizzle moment and the crave-ability of Spam.”

Hovde also said there is currently a sweepstakes for non-Hormel Foods employees, #SizzleToWin. From now until October, post a picture on Instagram, Twitter or Facebook of Spam sizzling in a pan to be entered for a chance to win a trip to Hawaii.

For more information on the tour, visit http://www.spam.com/tour.