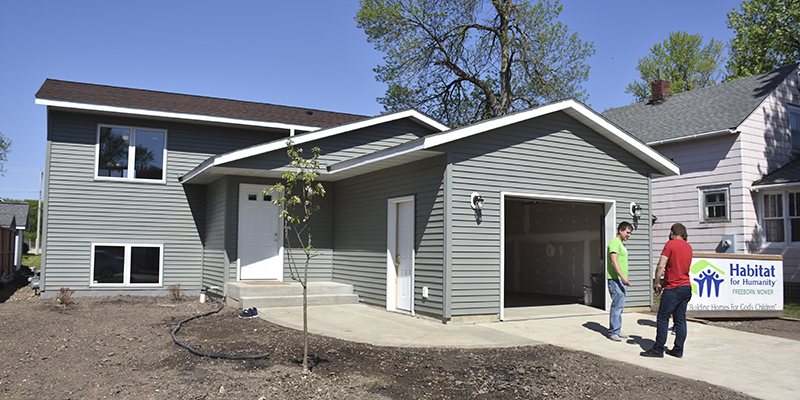 The Gonzalez-Merlin Family’s new house was built by volunteers from Habitat for Humanity Freeborn/Mower and students from Riverland Community College. Michael Stoll/mike.stoll@austindailyherald.com

We sometimes take simple things for granted, like having a roof over our heads in a heated home. But for Yaredi Gonzalez-Merlin, such things will never be taken for granted.

The single mother of three wiped tears from her cheeks during the dedication of her new home on Friday morning. As the family explored the house, her older sons Bryan, 10, and Marvin, 8, eagerly opened every door. Bryan was quick to point out which bedroom was his. 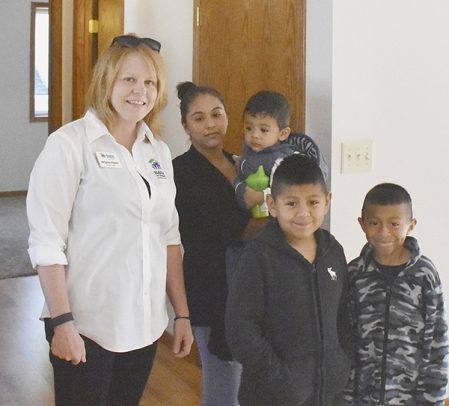 “I wasn’t 100 percent sure at first about getting approval because it’s a long process to get qualified,” said Gonzalez-Merlin, who contacted Habitat for Humanity in 2015.

Before approval, Habitat for Humanity conducted a visit to her old residence.

“There were characteristics of the home that deemed it substandard, which is a requirement for us to agree to help,” said Brigitte Fisher, Habitat for Humanity’s executive director.

Fisher cited lack of heat vents and electrical outlets in some rooms as some of the reasons for the decision.

According to Fisher, 20 volunteers helped build the house.

“For us to pull off this kind of work, we couldn’t do it without our volunteers,” she said.

Among those volunteers were carpentry students at Riverland, led by second year carpentry instructor Walt Alms.

“The students see real-life work, but the other part of it is they experience the need that somebody else has and provide that benefit,” Alms said. “It’s an awesome project for us to go from start to finish.”

This is the second home in Austin built by a partnership of Habitat for Humanity and Riverland Community College.

Several students and volunteers were present on Friday morning to see the fruits of their labor. Riverland President Dr. Adenuga Atewologun attended . 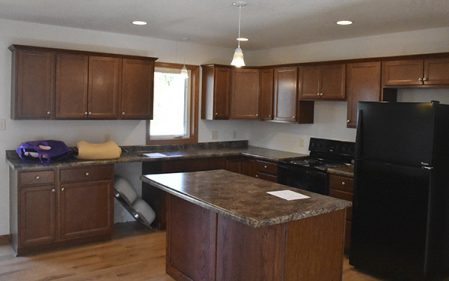 The interior of the Gonzalez-Merlin family’s new home. Michael Stoll/mike.stoll@austindailyherald.com

“It’s amazing to see the impact in the community,” Atewologun said during the dedication. “At Riverland, we have a mission. Our heart is to be dedicated to our students and our community.”

“May you enjoy the blessings that come from owning a home in Austin,” he said to Gonzalez-Merlin.

It is a sentiment with which Gonzalez-Merlin whole-heartedly agrees.

“I’m thankful for everybody who participated,” she said. “I’m very blessed.”