As Woodson Kindergarten Center Principal Jessica Cabeen danced in front of her roughly 360 students outside the school Wednesday morning, she noticed student Janae Flukes eyeing her, wanting to dance.

Cabeen and Janae clasped hands and danced together to the end of Justin Timberlake’s “Can’t Stop the Feeling,” this year’s song for Woodson’s annual video to celebrate the end of the school year.

This video will mark the fifth year since Cabeen brought the idea to the school in her first year.

“[It’s] just a great way to build community and make all the kids feel like rock stars,” she said.

The idea dates to 2013, when a teacher shot a 30-second video of Cabeen and teachers dancing to “Harlem Shake.” That was followed in 2014 by “Woodson’s Happy” based on Pharrell WIlliams’ “Happy,” then a Woodson-themed cover of “Pop See Koo” by Koo Koo Kanga Roo in 2015 and another Woodson-themed Koo Koo Kanga Roo song last year with “Critter Party,” which was based on “Cat Party.” 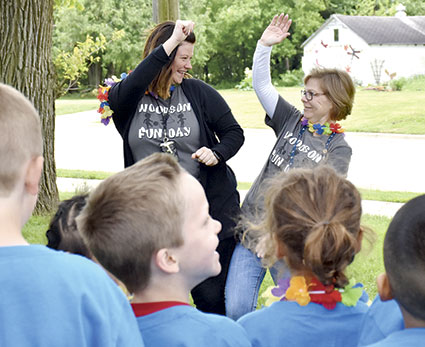 Each video has been viewed thousands of times online with “Pop See Koo” far and away leading the pack with more than 83,000 views.

And Cabeen says the videos have attracted attention beyond the expected interest from relatives and neighbors. On Tuesday, Cabeen and a teacher did a Twitter chat about this year’s video and received questions from people as far away as Texas.

Cabeen and Austin Public Schools Integrationist Ryan Mayers, who has filmed and edited the last three videos, say they pick a song that’s popular with the students.

“Can’t Stop the Feeling,” featured in the film “Trolls,” has been a favorite at Woodson’s morning dance parties, as has “Try Everything” from the movie “Zootopia.”

“It creates a real meaningful memory for them because it’s something they really listen to a lot and can really get engaged and involved in,” Cabeen said. 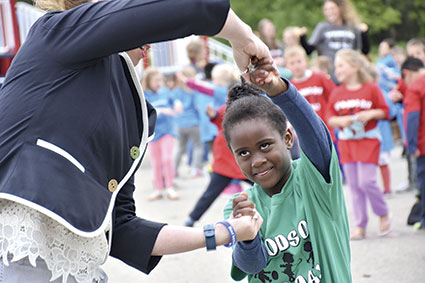 “Can’t Stop the Feeling” has also been featured on the learning platform Go Noodle, which, along with the morning dance parties, helps Austin’s youngest students get up and move to practice motor movements. And it keeps them active since research shows it’s not best for young students to sit all day.

The video is also a rite of passage and a fun way to mark the end of students’ first school year. Cabeen notes the kids get excited about the video and a chance to celebrate the learning and new relationships from the year.

The plan is to one day share the videos with the students when they graduate from Austin High School.

The videos go on the Austin Public Schools YouTube page and on Woodson’s blog. This year’s video should be going up online in the next few weeks before the end of school.