Cabeen named top principal; Woodson head was one of 3 finalists 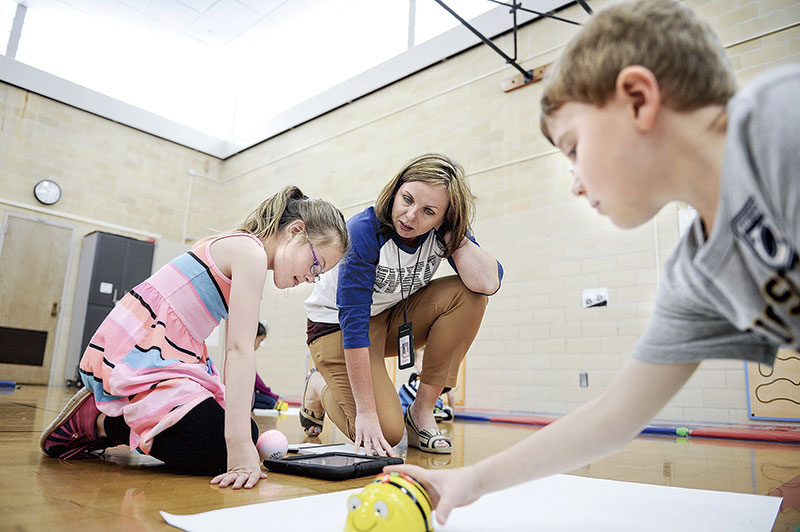 The award was created in 1984 to recognize and celebrate elementary and middle-level principals who set high standards for instruction, student achievement, character and climate for students, families and staffs in their learning communities, according to a news release issued by the MESPA. Cabeen was one of three finalists for the award. Her honor was announced Wednesday.

The program highlights the fundamental importance of the school principal in achieving educational excellence for pre-kindergarten to eighth grade students and reinforces their continued leadership in helping children develop a lifelong love of learning.

She joins honorees from each of the 50 states.

“My mantra this year has been, ‘If serving is beneath you, leading is beyond you,’” said Cabeen in the release. “This mantra provides the motivation to ensure my day is balanced with opportunities to serve and lead.”

Superintendent Dave Krenz praised Cabeen for the honor that exemplifies, he said, an excellent leader committed to education.

“It is a tribute to her outstanding work ethic and dedication, not only to her students and staff, but to her own personal growth as well,” he said.

MAESP noted her leading accomplishments included the facilitation of the Minnesota PreK-3 Principal Leadership Series within the MAESP, creating technology opportunities for students and staff in the primary years, and creating and implementing a successful year-long district wellness initiative that partnered with community agencies and businesses.

Her peers and staff said Cabeen was well-deserving of the honor.

“Transformational leadership is rarely demonstrated so seemingly effortlessly in public education,” said Neveln Elementary School Principal Dewey Shara. “However, Jessica Cabeen exemplifies a transformational leader. She not only directly improves those who work with her, she indirectly elevates those around her.”

Lisa Bergstrom, who today is a kindergarten teacher in Thief River Falls, said the four years she worked for Cabeen were “the best four years I have had in education” and called her a “true visionary when it comes to her leadership. … One of her greatest strengths is her ability to positively work and support the people around her.”

Ellen Verdoorn, who is a Woodson kindergarten teacher, said “As a lifelong learner, Mrs. Cabeen is always motivated to explore, initiate and follow through on ideas that will bring successful programming and unique learning experiences to kindergartners.”

“Jessica listens to the parents, children, and I see she really knows how to build strategies and actions that work,” and praised Cabeen’s use of technology, such as with videos, “Kid Principal,” “ Polar Express” and the school dance sessions.

Executive Director of Educational Services John Alberts said “you will not find a greater advocate for early learning.”

The MESPA release noted “Cabeen not only works in the community, she also brings the community into her school,” and established the “Everybody Wins MN!” program, dedicated to building partnerships with corporations and elementary schools that, in Woodson’s case, resulted in a reading buddy program with Hormel Foods Corp.