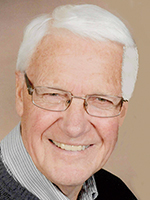 Bruce was born Jan. 4, 1941, in Fairmont, Minnesota, to Herbert and Hattie (Pierce) Fluegel. He grew up in Fairmont and graduated from Granada High School in 1959 before attending Mankato State University for two years. Bruce served his country in the U.S. Army from 1960-1963, stationed in Germany. On April 21, 1962, Bruce and JoAnn Kruger were married in Fairmont. Following JoAnn’s death, he married Cheryl Kruger on May 18, 1985.  Bruce worked at Railway Motors in Fairmont for four years, then began a career with Sears, which took him to Waseca, Northfield, Cannon Falls, International Falls and Austin. In 1983, he purchased the Sears franchise in Austin and continued until 2000. Bruce worked as the business manager for St. Olaf Lutheran Church from 2001-2005. While in Austin, he was active at St. Olaf Church, serving on the church council and many other offices. Bruce was active in his community and belonged to Rotary, Morning Lions, was an ARC board member, and he coached youth football. Bruce enjoyed living at The Meadows in Austin and The Wells in Mesa, Arizona, where he spent many winters. He especially enjoyed yardwork and carpentry, offering his remodeling, building and fix-it skills to everyone. Bruce enjoyed watching Minnesota sports, traveling, and playing cards and games. He took pleasure in helping others and sharing what he had. Bruce treasured the time he spent with his kids and grandkids. His faith, family and friends were most important to him. He will be dearly missed by many.

Bruce is survived by his wife, Cheryl Fluegel of Austin; his sons, Trent (Becky) Fluegel of Rochester, Minnesota, and Matt Fluegel of Minneapolis; four grandchildren, Luke, Kelsey, Addison, and Blake; his brother, Al (Iva Lou) Fluegel of Cambridge, Minnesota; sisters, Mary Fluegel of Fairmont and Dorothy (Terry) White of Tomahawk, Wisconsin. He was preceded in death by his parents; his first wife, JoAnn; brothers, Herb, Dick, and Roger; and his sister, Eleanor.

A memorial service will be held at 11 a.m. on Saturday, May 20, 2017, at St. Olaf Lutheran Church in Austin with Todd Portinga, Associate in Ministry, officiating. Friends may call from 4 to 7 p.m. on Friday, May 19, at the Worlein Funeral Home in Austin and one hour prior to the service at the church on Saturday. Interment will be held at a later date.

Services prearranged and performed by Worlein Funeral Home of Austin. Condolences may be expressed to the family online www.worlein.com.