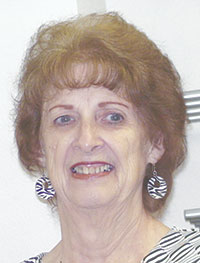 Beverly Ruth (Finley) Klusmeier, 83, was called to her heavenly home on Thursday, May 18, 2017, after a long and courageous battle with cancer.

She was born Aug. 4, 1933, in LeRoy, Minnesota, the daughter of John and Dorris (Engstrom) Finley. At a young age, her family moved from LeRoy to Rose Creek, Minnesota, where she attended school for 10 years. The family then moved to Otranto, Iowa, where she graduated from St. Ansgar High School in 1951. After graduation, she worked for two years in the offices of Rath Packing Company in Waterloo, Iowa.

On Dec. 8, 1954, she was united in marriage to Leslie Carr Klusmeier of Otranto. They made their home in Otranto, where they owned and operated the Hatchery and Produce Feed and Seed Store. They adopted two children: LuAnn Marie and Lora Lee. When Leslie passed away suddenly in 1966, Beverly continued to live in Otranto for the next 68 years, where she raised their young daughters, had many friends, and attended Otranto Community Church, where she taught both Sunday School and Bible School. She was also an active member of the Ladies Aid there. She was baptized by the Rev. LaBrenz at the First Baptist Church in Austin, Minnesota, and renewed her Christian faith with the Rev. David Jeremiah Ministries in Minneapolis, Minnesota, in 2013.

Beverly worked at various part-time jobs until her daughters were grown, after which she worked at Cargill Corp. in Albert Lea, Minnesota, retiring after 23 years. She then worked part-time at Casey’s Pizza in St. Ansgar until her health failed.

Beverly enjoyed knitting and crocheting, playing cards with her women friends, and she was “the organizer” of many fun and memorable “adventures” with her sisters.

We loved “Bev” dearly and will miss her caring and thoughtful nature, kind heart and generosity of spirit to family and friends.

A memorial service will be held at 11 a.m. on Wednesday, May 24, at Clasen-Jordan Mortuary of Austin, with the Rev. Joel DeNeui officiating. Interment will be in Woodbury Cemetery, Lyle, Minnesota. Visitation will be one hour before the service on Wednesday morning.