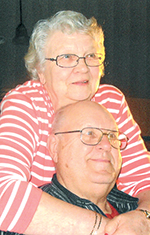 Beverly is preceded in death by her parents, John and Sophia Nelson; and one son, Danny Hoium.  Sterling is preceded in death by his parents, Roy and Clara Hoium: their son, Danny Hoium; and a brother, Arthur Hoium.  Survivors include their children, daughter, Peggy (Hoium) Carpenter and her husband Thomas Carpenter; son, John Hoium and his wife Stacy Hoium; daughter-in-law, Jamie Hoium (Danny’s wife); seven grandchildren: 14 great-grandchildren; Sterling’s brother, Donald (Merilyn) Hoium; his sister, Ann Hoium and her partner Eydie (Penn) Hoium; sister-in-law Esther Hoium (Arthur’s wife); Beverly’s sister Avis (Nelson) Krampitz and her husband Martin; many nieces, nephews, and other relatives and friends. They will be dearly missed by their family and friends.

A memorial service will be held for the couple at 11 a.m. on Thursday, May 18, 2017, at the First Lutheran Church in Blooming Prairie with Pastor Heidi Heimgartner officiating. Friends may call from 10 to 11 a.m. at the church on Thursday, immediately preceding the service. Interment will be in First Lutheran Cemetery, Blooming Prairie. Services prearranged and performed by Worlein Funeral Home of Austin. Memorials can be directed to recipient of donor’s choice.  Condolences may be expressed to the family online at www.worlein.com.