‘Be a Beacon’; Holton kids use the power of paint to be Partners 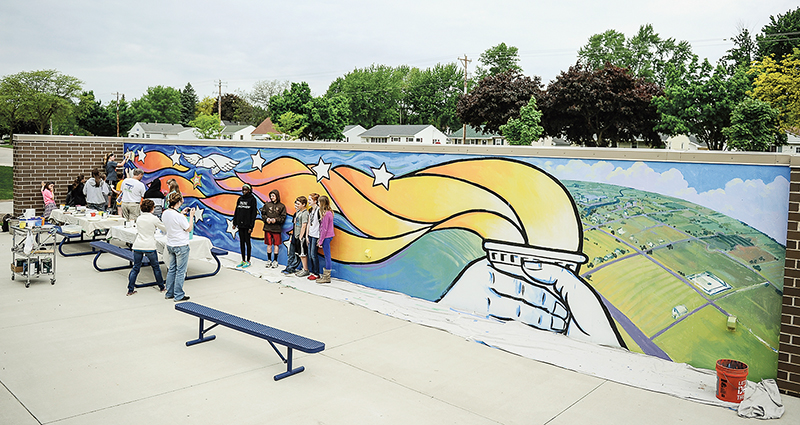 The fifth and sixth graders at I. J. Holton Intermediate School found out their mural is made of more than heavy-duty exterior latex paint.

In fact, the mural, entitled “Be a Beacon,” was created over a length of time that predated students first picking up brushes. 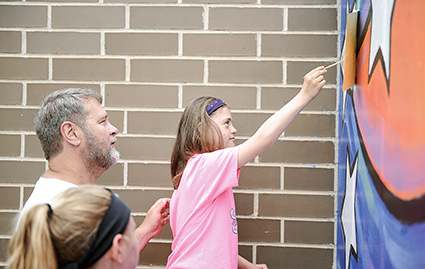 Artist Greg Preslicka of Savage, in fact, had created three different scenarios that reflected tenets of the school’s Peer Power Partners, a mentoring program that pairs students with disabilities with non-disabled students, who provide support, friendship and collaboration on projects. The student body cast votes on the one they liked the most.

One rose to the top: “Be a Beacon” showed a hand holding a torch, with long waves of vibrant orange flames flowing against a cornflower blue sky, and interwoven with stars. Words like “unique,” “fairness,” and “kindness” — character traits to be lifted up — were colored in the middle of the five points. Overall was a large hawk, wings spread; off to one side was a community landscape.

Fifth graders Lillyan Wiese, 11, and Kira Halvorson, 11, were just some of the students who picked up a brush. 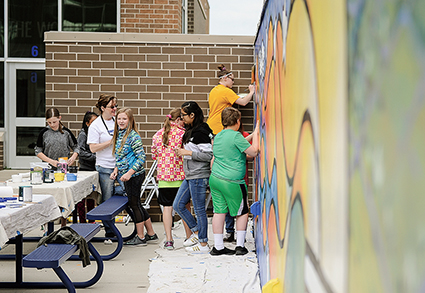 “It’s been fun,” Kira said, adding that she enjoyed the stars and the qualities they conveyed.

“And the hawk — because we are the Holton Hawks,” Lillyan explained.

She also liked the community landscape, which, she pointed out, was inset with puzzle pieces.

“That’s because some people in Peer Power Partners have autism,” she said, adding that puzzle pieces were symbols of the disorder.

A $5,000 grant helped to bring Preslicka to the school, said PPP coordinator Mary Barinka, because of his vast experience with murals, and his love of working with kids.

“I’ve done a lot of school work, library work — mostly because I love working directly with the kids,” he agreed. 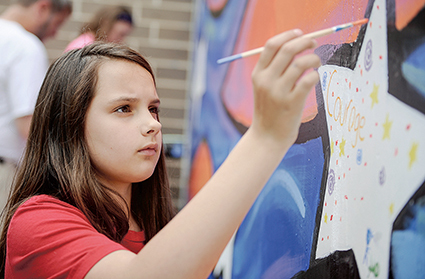 I.J. Holton Intermediate School fifth-grader Madyson Duenes addes some touches to the the new mural at the school.

Barinka said the mural embodies the mission of the program, first created in 2013 in collaboration with the Parenting Resource Center, Austin Public Schools and Vision 2020. The program is also in place at Ellis Middle School and at Austin High School.

The 53 foot-by-8 foot mural not only represents a community working together, but mentors and mentees working together on the artwork together as well. Accommodations were made, if needed, for a students’ disability. Preslicka could be seen lifting children to spots that were hard to reach.

It really was a student-driven project, said Preslicka. When he first asked for responses initially about what should included in the mural, he made sure the students understood they could sketch or doodle something if they did not want to raise their hand in a class.

Preslicka, who traveled to Austin with his wife, Heidi, began sketching the exterior mural, created along the inside wall of an outdoor brick barrier, earlier in the week. Students began their work on Thursday and continued to Friday. Depending on weather, work on the mural will finish up early this week. Barinka said community members have already visited the area to see the progress and invites others to check it out.

“It has been wonderful working with these kids,” Preslicka said. “Seeing them work together — is really has been inspiring for me,” he said. 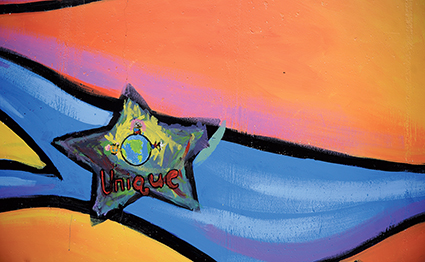 A star inscribed with the word “Unique” adorns a new mural at I.J. Holton Intermediate School.