Back on the perch: Nature center welcomes back the presence of hawks 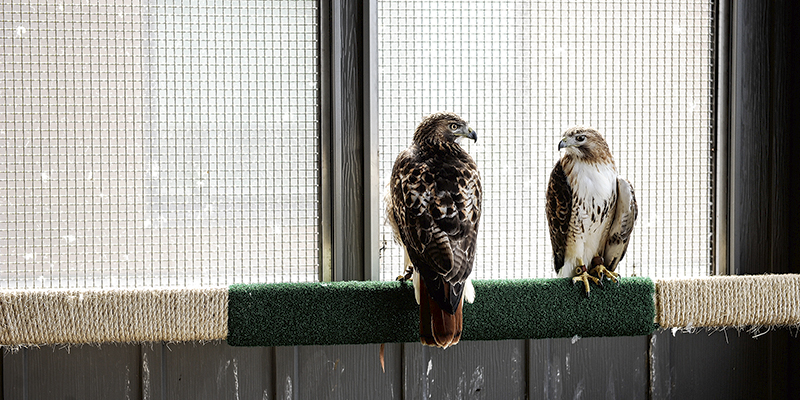 Wiyaka and Sha sit on a perch in their new home at the Jay C. Hormel Nature Center. Eric Johnson/photodesk@austindailyherald.com

When the Jay C. Hormel Nature Center officially unveiled its new interpretive center to the community and area, all those new displays, bells and whistles weren’t the only new additions. Visitors were introduced to Sha and Wiyaka, a pair of red-tailed hawks it acquired from the Indiana Raptor Center, out of Nashville, Indiana. Both hawks were in the care of the center after being struck by cars. Sha, a male, and Wiyaka, female, will follow in the educational footsteps of Red, a red-tail hawk that passed away in 2013 after 33 years with the nature center.

There was never any question with nature center staff after Red died of getting another hawk. The long-lived raptor, thought to be one of the oldest captive hawks in the state at 35-years-old, was an invaluable connection for visitors to the world around them for the 33 years Red was with them.

So when Red died, the nature center put word out that they were looking for another hawk, but they couldn’t act immediately. At the time, plans were firmly on the move toward raising funds for the new interpretive center and building it.

In August of 2016 the nature center was contacted by Patti Reynolds and Laura Edmund of the Indiana Raptor Center.

However, two hawks weren’t in the initial plan.

“We were only interested in one, but they asked if we would take both,” said officer manager Julie Champlin, who was also the primary handler of Red. “Both had been in vehicle collisions and were housed together when they were brought in.”

New Jay C. Hormel Nature Center Director Luke Reese then went before the park board to float the idea of acquiring both rather than just one.

Recognizing that it was kind of a sin to separate them after spending so much time together, the park board OK’d the move. 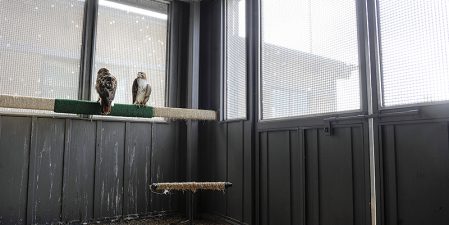 Wiyaka and Sha both came to the nature center after being housed together at the Indiana Raptor Center where they both came in close to each other after being hit by vehicles. Eric Johnson/photodesk@austindailyherald.com

Hurdles along the way

She and Wiyaka eventually arrived at the nature center late on Good Friday, but not without some trials along the way.

After agreeing to take the new hawks [Minnnesota Department of Natural Resources regulations doesn’t allow for the purchasing of birds], the nature center took over financial care through Friends of the Nature Center while the hawks waited to be transferred, which was anything but easy.

“We kept trying to set up time for them to fly out here,” Champlin said.

But hurdle after hurdle kept delaying them until finally at just after 10:30 p.m., Champlin was able to pick up Sha and Wiyaka at the airport in Minneapolis.

But even then, things were not easy. As Champlin took possession of the hawks and was leaving the airport, Wiyaka, fed up with being confined to an adapted dog kennel for hours, started bucking and acting up. Along the way several people stopped the small airport caravan, asking what was in the kennel that could be causing so much commotion.

“He was not happy about being in that dog carrier,” Champlin said.

The crew arrived at the nature center just after midnight and then hunkered down for a late night as Champlin had to get the hawks acclimated to the new surroundings, turning on all the lights in the place so they both could see perches and the various points of their new containment area.

“They just looked at us like, ‘Where are we now?’” Champlin said with a laugh. 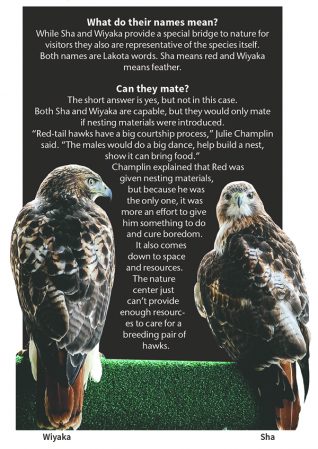 It must be made clear that Sha, Wiyaka and the center’s resident barred owl Guka, are not pets. They are a connection to our world and the natural world.

Each year, the DNR stipulates so many hours of educational programming must come from the birds, something the nature center is more than willing to do.

It’s always been the aim to get people as acquainted as possible to the world around them as much as possible and these birds, so close to visitors as they walk through, is key to that.

“The nature center has a strong focus on birds of prey,” Champlin said. “People get attracted to large birds they can see driving down Interstate 90. Part of our educational mission is to utilize the birds to teach people to appreciate nature.”

Each January Champlin is required by the DNR to report the time the birds are used to hit a mandated number of hours for educational purposes.

Not that it’s that hard to incorporate. The birds are one of the most popular draws to the nature center because of that access. The first weekend the new interpretive center was opened, Champlin estimates 1,000 people saw the birds and to date that estimate has grown to 2,500 to 3,000.

All to get that special touch from nature.

“We love teaching about their special skills.”