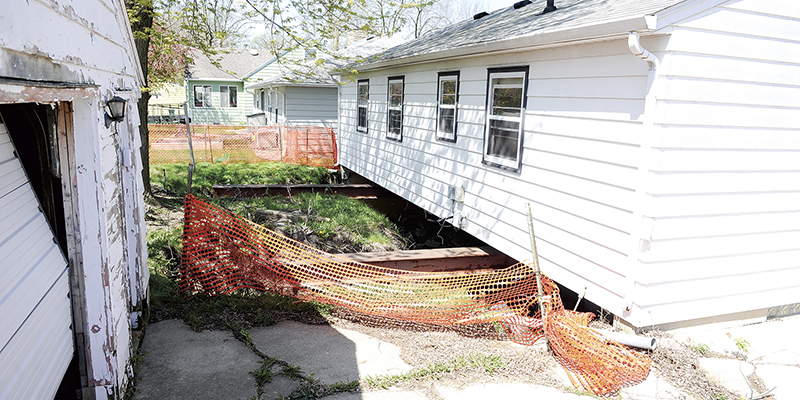 A giant hole lays exposed in the back of the home at 2006 Sixth Avenue Northeast, which the city has recently declared as hazaradous. Eric Johnson/photodesk@austindailyherald.com

Austin resident Kelli Geffert is a mother of two small children and has lived in her home on Sixth Avenue Northeast for 10 years. Yet for the past two years, she has lived next door to a potentially dangerous eyesore.

“My children’s safety is my main concern,” she said.

The Austin City Council voted unanimously this week to declare the residence at 2006 Sixth Avenue Northeast a hazardous structure during its meeting, and a bank that owns the property has said it will raze the home.

The residence was placarded as uninhabitable when the southern foundation collapsed in June 2015.

Since then, the site has posed a concern to the residents of Sixth Avenue Northeast because of its openness and easy accessibility.

“It’s right by a park, and there are kids in the neighborhood that can get into the house,” said Geffert, who contacted Mayor Tom Stiehm and Councilwoman Judy Enright about the residence. She has also taken to social media to make the community aware of the structure.

There is also concern about the structure being a health hazard, the result of a freezer in the basement that still contains food.

“When the wind is blowing a certain direction, you can smell it,” Geffert said. “It’s also been a breeding ground for stray cats and rodents.” 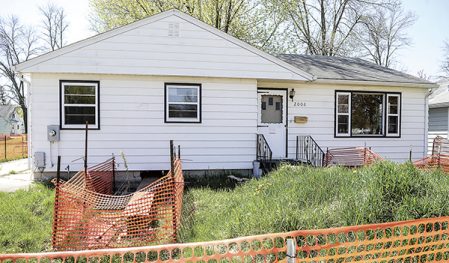 The city has declared this home located at 2006 6th Avenue NE hazaradous and will eventually be torn down. Eric Johnson/photodesk@austindailyherald.com

The city sent a letter to the original owners in 2015, notifying them to fix it because it was a zoning code violation. After their insurance claim was denied, the owners chose to abandon the property.

Wells Fargo & Co. foreclosed on the property in March 2016. The following June, the Austin Building, Planning and Zoning Department sent a letter to Wells Fargo informing the company of the zoning violation. Wells Fargo attempted to sell the property “as is,” but did not find any interested buyers.

After sending Wells Fargo several requests for a repair schedule, to which Wells Fargo responded that it was waiting on bids, the city notified the bank that it would move forward with declaring the structure hazardous.

But, the City Council’s declaration does not mean immediate removal.

“We served the resolution to Wells Fargo,” said Planning and Zoning Administrator Holly Wallace. “They have confirmed that they plan to go through with the demolition.”

Wallace said the city will continue with its hazardous building action as a backup plan should Wells Fargo fail to demolish the house. This would involve the city sending a demolition request to a judge. If the request is approved, the structure must then be tested for asbestos, which would have to be removed before any more work could be done on it. Once that is over, the city will hear bids for demolition.

For Sixth Avenue Northeast residents like Geffert, the longevity is frustrating.

“The soil is being washed away around the basement,” Geffert said. “I can’t help but wonder if its doing damage to my house, which is 10 feet away.”

“I would like it taken down,” she added. “There are people on the street, including myself, who want to sell their homes. My house is worth nothing with that house next to it.”