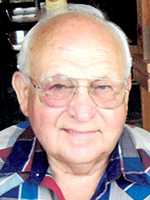 He was born June 17, 1927, in Winona, Minnesota, to Bernard and Anna (Pflugoeft) Koetz. Arnold attended country school near Winona, where he lived until moving to Owatonna, Minnesota, in 1957, to Austin in 1960, and finally to Lansing in 1992. Arnold served his country in the U.S. Army from 1950 to 1952, achieving the rank of corporal. On May 29, 1953, Arnold married Elaine H. Kleiner at St. Matthew’s Lutheran Church Parsonage in Winona. The couple had three children. Arnold made his living as a meat cutter at many grocery stores in Austin and after retirement he continued as a meat cutter part time at Jim’s Marketplace Foods, until the age of 85. Over the years, he was a musician in several bands in the area, including The Circle K Wranglers, The Country Rascals and The Rhinestones. Other favorite pastimes included gardening and camping. Arnold was a former member of Holy Cross Lutheran Church and Crane Community Chapel. He also was a member of the American Legion in Albert Lea, Minnesota, the Moose Lodge and the Eagles Club. Arnold will be missed by all who knew and loved him.

A memorial service will be held at 11 a.m. on Friday, May 26, 2017, at the Worlein Funeral Home Chapel in Austin with the Rev. Barbara Finley-Shea officiating. Visitation will be held for one hour prior to the service. Interment will be in Rose Creek Enterprise Cemetery, rural Austin, with military honors by American Legion Post 91.