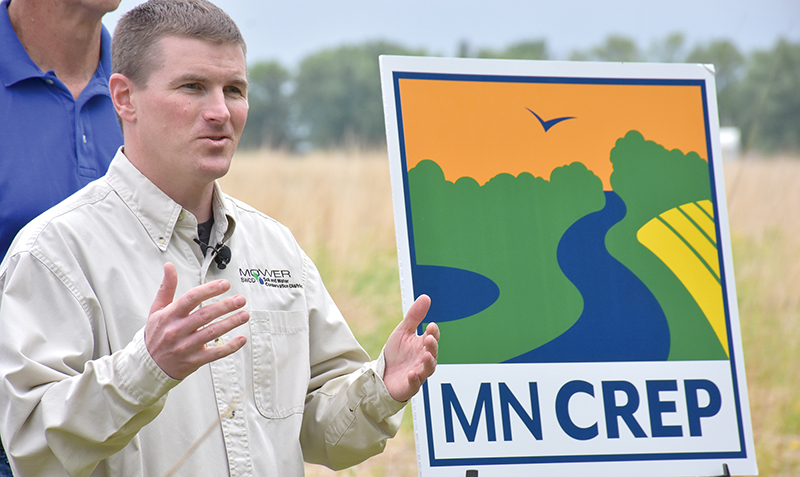 Farmer Roger Peterson’s Udolpho Township farm borders the Cedar River. There is a buffer area between his fields and the river, land that is under the protection of the Minnesota Conservation Reserve Enhancement Program, or CREP.

It was on this land that members of the Mower Soil and Water Conservation District and state leaders announced that farmers could once again start signing up for CREP. 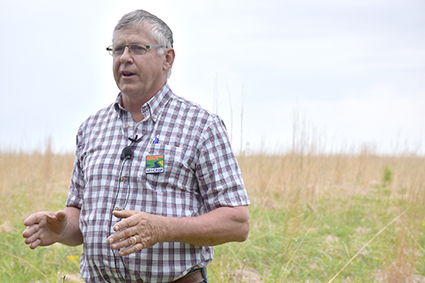 Roger Peterson talks on his land on the northwest end of Mower County which has been put into the Conservation Reserve Enhancement Program, or CREP.

“CREP has been an incredible tool across our state,” said Justin Hanson, district manager for the Mower Soil and Water Conservation District.

CREP is a voluntary federal and state funded program that uses agricultural land for conservation instead of farming or ranching. CREP’s goals include providing habitats for wildlife, reducing nitrate loading in drinking water through filtration, preventing erosion and providing flood mitigation.

According to the Minnesota Board of Water and Soil Resources, CREP “will protect and restore up to 60,000 acres of marginal cropland across 54 southern and western Minnesota counties, using buffer strips, wetland restoration, and drinking water wellhead protection.”

Landowners who are accepted into CREP enroll in the United States Department of Agriculture’s Conservation Reserve Program for 14-15 years. At the same time, the land is put into a permanent conservation easement through the state’s Reinvest in Minnesota easement program. Private ownership continues and the land is permanently restored and enhanced for water quality and habitat benefits.

Hanson says the response to CREP in Mower County has been positive. 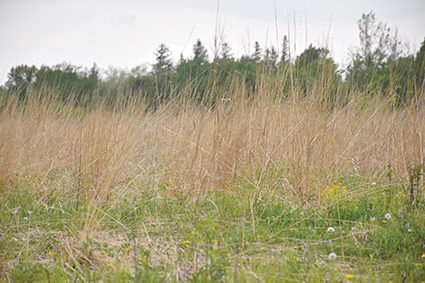 “We’ve been able to build clusters throughout the county,” he said. “One person gets involved, then tells the neighbors it’s a program they can trust. We get neighborhoods where people sign-up and most of them are in our riparian areas, the areas that need the protection most.”

Peterson got involved in CREP out of a love of wildlife and the unpredictability of the land by the Cedar River.

“I farmed right up to the river years ago, but it was just tough to farm because the inputs have gotten so high,” he said. “You may have gotten a crop every second or third year, and some years you didn’t get a crop because it was too wet. This way, with the grass here, it holds the water back and I can farm the upper part of the field.”

Peterson says he plans to have more easements put in place through CREP.

“I would like to encourage some of the farmers to look at CREP and encourage the taxpayers to think about this as improving water quality for everybody,” he said. “Funds for this program have to come from somewhere, and I know there are some criticisms about that, but it benefits everybody.”

If you’re interested in signing up for CREP or learning more, visit www.bwsr.state.mn.us/crep.