A question of the future; Southland voters to decide $24.5 million bond 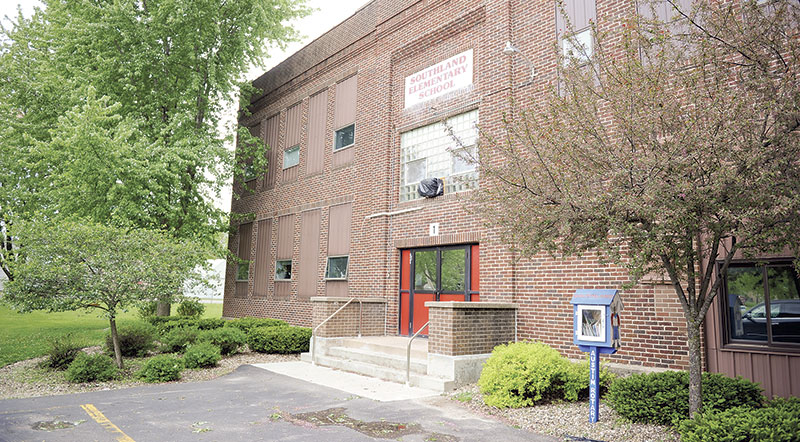 The Southland School District is looking into a possible referendum that would relocate the elementary to Adams. Eric Johnson/photodesk@austindailyherald.com

Voters in the Southland School District will go the polls on June 6 to decide whether to spend $24.5 million on a massive renovation project that would include closing the Rose Creek elementary school and moving students in kindergarten to fifth grade to the main campus in Adams.

If approved all of the district’s K-12 students would be located on the Adams site.

Polling takes place from 7 a.m. to 8 p.m. at the Southland High School/Middle School in the high school gym.

The project, planned and designed by ICS Consulting of Blaine, is broad in scope, according to Southland Superintendent Jeff Sampson.

He told about 70 attendees at an informational meeting in Dexter on Wednesday that the only existing area of the Adams site that will not to be touched by the project was the gym and locker rooms.

Overall, he said, the Southland School Board thought the plan “was the most cost-effective and best long-term solution” for the issues facing the district.

The work would provide upgrades to the existing middle school and high school in Adams, including mechanical upgrades of HVAC, electrical and disabled access.

A new, secure main entrance with adjacent administrative areas would be built on the southwest corner of the school. A new gym would be added due to the increase in elementary population and for extracurricular activities.

The southeast classroom wing of the Adams building would be renovated to absorb the K-5 elementary grades. The additional classrooms would be created in the wing by converting the current kitchen/cafeteria into classrooms.

The plan is one of seven studied by a 31-member facilities task force and later chosen by the Southland School Board as the best to take to the public. The plan reduces the cost of operating multiple sites, and helps strengthen the finances of the district, according to discussion on Wednesday.

Not all agreed with the plan during the gathering, the last of three public meetings held to discuss the referendum.

Some cited the increased taxes for farmers who were already hurting financially, or for older residents, who may have limited means to pay the increase.

Others questioned whether it made sense to pay such a large amount for renovating such an old building, whose original construction was from 1912, especially in light of declining enrollment. Southland has 447 students this year; by 2022, projections say the district will have under 400. Some said they were worried if Southland eventually merged with another district, or if it dissolved, they would still have to pay for the school. Another woman said the district should wait and see how enrollments rise or fall over the next few years before raising taxes for the upgrades.

One farmer from Elkton, Rod Chapek, said, “I want the school … but I don’t want to pay for it,” adding he would be paying over $200,000 in additional taxes over the next 20 years if the bond passed.

He added the families that have children should pay for new schools. Another younger farmer said it would be too difficult to stay in farming if his taxes increased. 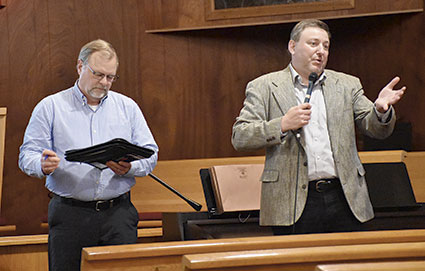 Jeff Seeley of Ehlers, Inc., right, discusses tax impact of a proposed $24.5 million referendum for Southland Schools on Wednesday, during a public meeting in Dexter. At left is Bob Prell of ICS Consulting, Inc. Deb Nicklay/deb.nicklay@austindailyherald.com

Others supported the project, adding too many things needed fixing to delay any longer and children deserved the right environment for today’s education. One said he was “proud and honored to pay extra taxes to upgrade” the school. He said it was time to talk about their children’s education.

District officials have estimated it would save about $389,548 a year if Rose Creek was shuttered. It had identified some $4 million in deferred maintenance and capital improvements that would have to be done if students remained.

The Rose Creek building would not remain empty. The Southern Minnesota Education Consortium, a partnership of seven participating schools that serves the schools’ special education students, has offices there now and would remain. The SMEC would utilize office space and address about $2.5 million of the maintenance needs, said Bob Prell of ICS.

Prell said the proposed project would be the most cost-effective and the Adams building “had good bones” despite its initial age.  He was responding to some comments about why a new building was not being considered. In fact, it was one of seven options considered by the task force, and was more expensive.

Specifics of the plan

At the Adam’s site, renovations to be completed include:

•Renovation of 1917 two-story wing for classrooms, computer labs and support.

•Auditorium and stage renovation, and new seating and walls.