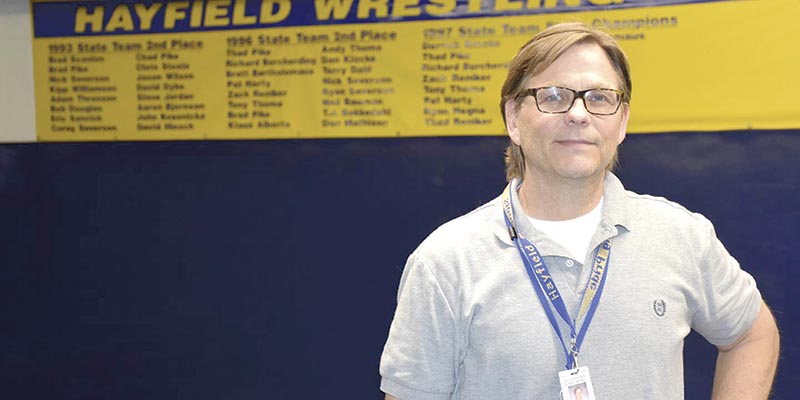 Mark Voyce of Hayfield was recently inducted into the Minnesota wrestling Hall of Fame. Rocky Hulne/sports@austindailyherald.com

HAYFIELD — Back in the mid 1990s Hayfield was the hub of wrestling in Southeast Minnesota and a big reason for that was Mark Voyce, who was recently inducted into the Minnesota Wrestling Hall of Fame.

Voyce finished with a record of 186-94-1 overall as a head coach, his teams went to the Minnesota Class A State Wrestling Meet three times and they won the 1997 Class AA state title. Voyce coached 52 individual wrestlers to the state tournament, with 31 of them being place-winners and 11 winning state championships.

Voyce still teaches at Hayfield schools, however he’s not one to draw attention to himself. He mostly likes to look back fondly on his time at the helm for the Vikings.

“When I hear Hayfield, I hear wrestling and I’m proud to be part of that tradition,” Voyce said. “When I first came here, our athletes were unbelievable. We had kids that wrestled 150 or 200 matches a year. We had all kinds of talent here and it wasn’t what I did. All I had to do is practice hard and then just get out of the way during meets and let them do what they were really good at.”

Klaus Alberts wrestled on the 1997 state championship team and he won an individual state championship at 145 pounds under Voyce. He also went on to wrestle as an All-American at St. Cloud State University. Alberts gives Voyce a lot of credit for letting him wrestle the way he wanted to instead of trying to change his style.

“I came to Hayfield from a different school where they didn’t like it if you did things differently. Mark looked at us all individually and taught us it was OK to be different,” Alberts said. “ I wasn’t recruited very highly because I did things that way. A lot of people would’ve written me off because I wasn’t good at most good things wrestlers were good at. Mark helped me with that.”

Voyce was a calm leader in the wrestling room and Alberts said he only got mad one time in practice. A lot of Hayfield’s wrestlers went on to have success in either college wrestling or the military, according to Alberts.

“Mr. Voyce was the last person anyone on that team wanted to let down,” Alberts said. “The kids who came out of that room did pretty well and Mark was a big reason why.”

Brett Bartholomaus also wrestled on the Hayfield state championship team in 1997 and he is now the head wrestling coach at Red Rock Central. Bartholomaus inducted Voyce into the Hall of Fame at the induction ceremony.

“I think Mark and Dave Erickson built something that was pretty special and you don’t see that in every community. What they built was pretty spectacular,” Bartholomaus said. “I think everybody saw that [Voyce] was a good teacher, a good role model and just an all around good person that took a lot of pride in allowing people to accomplish things. We knew he was in it for the right reasons and it was easy for me to see that. He’s in the Hall of Fame and that’s where he deserves to be.”

Voyce said the key to Hayfield’s success over the years was the amount of wrestlers in the room that were able to push each other every day. Voice relished his time in the practice room as he saw it as an opportunity to teach the sport.

“I always considered practice as my teaching [time] and when we went to meets, that was my coaching [time],” Voyce said. “I expected kids to stay focused and pay attention just like in class. I helped them do what they do well in the practice room and I tried to put them in the best positions when they wrestled in meets.”

Voyce said he mostly relishes the memories and the relationships he had with the wrestlers he coached. Voyce also appreciates the life lessons that wrestling teaches.

“Wrestling helps you with your self discipline. A lot of guys that I know who were really successful, they set goals, they achieved those goals and then they set new goals,” Voyce said. “I think that’s really important. We talked a lot about in our practice room for guys to think about what they wanted to accomplishment.”

While Hayfield no longer has its own wrestling team as it shared a co-op team with Blooming Prairie called the Westfield Razorbacks this past winter. Westfield sent five wrestlers to the Minnesota Class A state wrestling meet this year and two of them ended up on the podium. Voyce went into the wrestling room and helped the team out whenever he got a chance.

“It was a big plus for both districts,” Voyce said of the co-op. “It was hard to find practice partners the previous year. This year the room was full again and his were having success. It’s because of Shane [Masching], Chad [Gimbel] and Brad [Heydt] that they’re having that success. I think having a full wrestling room makes a big difference.”

Voyce is attended high school in Knoxville, Iowa and he graduated from there in 1979. In high school, he had a record of 85-15 and he went on to wrestle at Cornell College in Iowa. He began coaching at Hayfield in 1986 as an assistant to Hall of Fame Coach Dave Erickson, then co-coached with Dave Erickson, and he continued until 1998.