A new era in nature 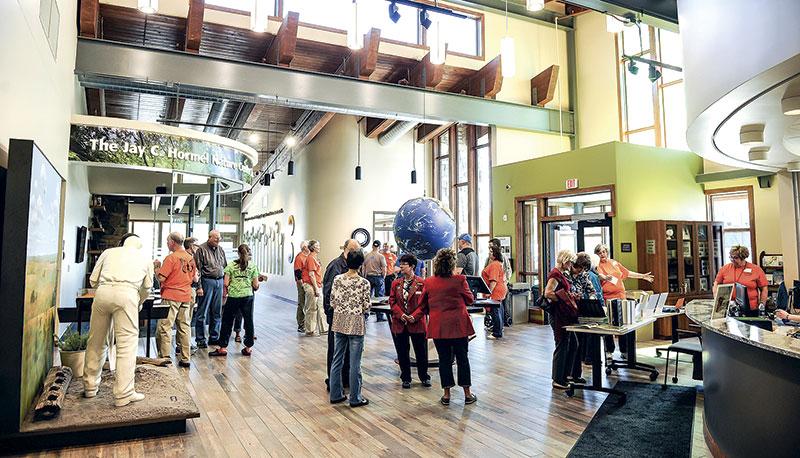 On April 22, Austin started a new era by opening its new Jay C. Hormel Nature Center interpretive center. A month later, nature center staff are still settling into the new $7 million building and getting used to its new educational exhibits, but one thing is for sure: It’s still a hit.

“It’s been great,” Director Luke Reese said. “There’s been a lot of people out here enjoying it.”

Workers from Split Rock Studios from Arden Hills, Minnesota, constructed new exhibits that are a mesh of new designs and the previous exhibits. The exhibits highlight the creatures of the night, the prairie, the forest, wetlands and much more.

Artists from Split Rock created large murals that wrap around a diorama; in one case, a mural from the current center was dismantled and incorporated, seamlessly, into a new, larger, mural, thanks to the artist’s talents. The nature scenes are lively and bright. And, you cannot see where the older painting ends and the new begins.

The exhibits have proved a hit so far with the public, according to Reese. At the old interpretive center, Reese said the center would be relatively slow on rainy days. But now, families are using the new building to get out and about.

“This has turned into a rainy day destination for families,” Reese said

Reese said he and staff are still getting used to the new space and just learning about the new building.

The early childhood room has gotten the most usage to date, as children are using it a lot and enjoying that space.

The new building replaced the old center, which was built in 1975. While it served well, it was known the building could never be replaced or changed. It was grandfathered in at its location in a flight path for the Austin Municipal Airport, but understood it could never be expanded.

The old interpretive center was taken down a few weeks later, and Reese, who worked as an intern at the old building, admits he had a bit of a funny feeling when he saw the building come down as he worked with a class of third-graders by the pond.

Despite the nostalgia with the old building, Reese said the new building has been a hit.

“Change is a good thing and nature is changing all the time,” Reese said, adding that the trees that people love will fall down and new trees will replace them.

“It is a very efficient building,” Reese said.

But one feature has attracted the most questions. Reese is frequently asked about the grey-dotted windows for the bird-resistant glass.

The new interpretive center is a culmination of a concept that began four years ago under former director/naturalist Larry Dolphin.

“The exhibits are well worth the walk through,” Dolphin said. “There are a lot of learning experiences available.”

A $5 million grant from the Hormel Foundation got things moving, he said. Then, $500,000 was received from the city of Austin, $300,000 from Hormel Foods Corp. and more than $1.2 million raised through the Friends of the Jay C. Hormel Nature Center.

“People are very happy with it,” Reese said.

The general contractor for the project was Met-Con Companies Construction Services of Faribault, and Split Rock Studios of St. Paul handled the exhibits. ISG is the company that designed the space.

—Deb Nicklay and Mike Stoll contributed to this report. 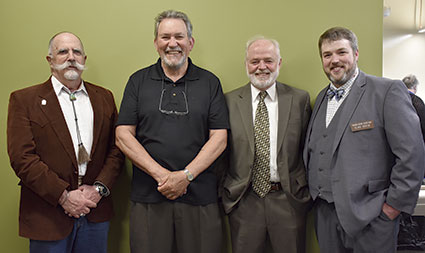 The four directors of the Jay C. Hormel Nature Center pose for a photo together during a sneak peek of the new interpretive center. Pictured, from left, are: Richard Birger, Vince Shay, Larry Dolphin and Luke Reese. Deb Nicklay/deb.nicklay@austindailyherald.com

1927: Jay C. Hormel plants the first of the 200,000 trees he will plant on his land for more than 25 years on what would later become the Jay C. Hormel Nature Center.

1974: Richard Birger is hired as the Nature Center’s first director.

1978: Fifty-five acres of land is added to the Nature Center. Vince Shay is hired as the second director.

1988: Larry Dolphin is hired as the third director.

1989: The Friends of the Jay C. Hormel Nature Center, a nonprofit organization, is established.

1992: Margaret Beck makes a sizable donation for the Ruby Rupner Auditorium and a series of environmental programs. The Jacques Chipault handicapped access trail is dedicated.

1994: The Ruby Rupner Auditorium is built and dedicated.

2002: The Friends of the Nature Center successfully fundraise to acquire 210 acres to add land north of the tower. The Nature Center currently has 507 acres and more than 10 miles of trail.

2014: Hormel Foundation agrees to give $5-million grant to help fund the $7-million project.

2015: The maintenance shop is taken down and moved, and a new entrance is build. Excavation starts on the interpretive center site.

2016: Construction on the  interpretive center begins. Director Larry Dolphin retires Aug. 31 after 28 years on the job. Luke Reese is hired as the new director and starts Aug. 24.

2017: The completed interpretive center is dedicated on Earth Day, April 22.