A home with a story to tell 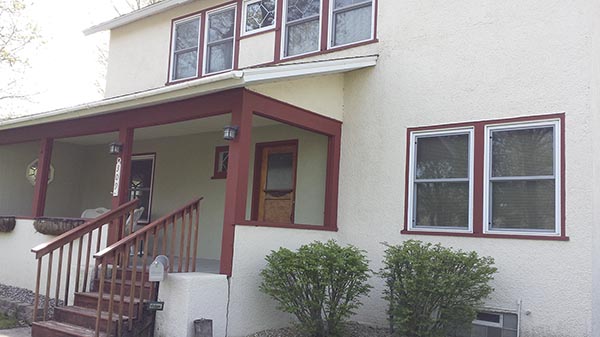 George Burnham’s wife was Marian “Minnie” Gleason, Lillian Hormel’s older sister. The current owner, Wendy Larson, is a history and home lover, and I was grateful to be invited to see where Lillian’s sister had lived.

Wendy has done a great deal of research on her home using the abstract, county records, and historic newspapers. She discovered that the Burnhams purchased the property for $1,100 at 5 percent interest, and she found tidbits in area newspapers that described the building of the home.

From the Mower County Transcript:

“George S. Burnham’s house on Water St. in ready for the painters. It will be finished next month.”

George Burnham worked for the railroad in Blooming Prairie and Marion was a teacher in the rural schools until their marriage in 1879. George served the community of Austin by being Clerk of Court. Mr. Burnham died in 1936 and Marion passed away in 1941 at the age of 84. Her obituary said that “the years touched her so lightly and so kindly that she might easily have passed for 20 years younger than her birthdays recorded.” Wow!

The Burnhams had two sons, but they were grown by the time the couple built on Water Street. They shared their home with boarders which was a trend that continued after the passing of Mrs. Burnham when Minnie Lang purchased the home.

She operated it as a boarding house attracting many teachers due to its proximity to the high school. The house has sold many times since then, but very little other than paint and wallpaper has changed. Wendy mentioned that after she moved in she removed 13 layers of wallpaper from one bedroom in order to paint it.

Upon moving in, Wendy found a box in the attic containing pictures and artifacts from the time of Minnie Lang. Forgotten for years, the box contained record of a family history that had been lost. Austin is filled with homes that have stories to tell. What stories are in your attic?

The Wide Angle: It’s okay, go out and read…