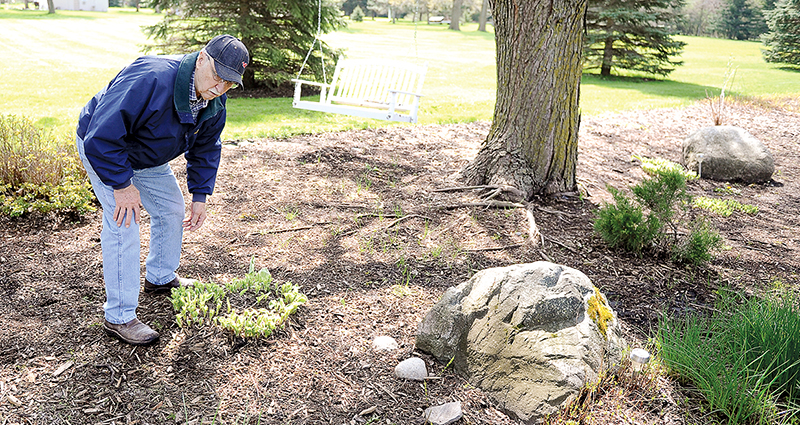 Rodney Kinney shows off the damage deer have done to his backyard plants. Photos by Eric Johnson/photodesk@austindailyherald.com

Rodney Kinney pointed out several bushes in his Austin yard that were stripped bare. The culprits: deer feeding on them. In his garage, he stored numerous potted plants that used to hang on shepherd’s hooks outside his house.

“They’ll walk right up and eat them right out of the pots,” he said.

An abundant deer population within the Austin city limits has led to damaged yards, especially for residents like Kinney, who says deer have done $3,000 to $4,000 in damage to his yard over the past few years.

“It’s gotten worse in the past few years because the herd has gotten bigger and bigger,” he said.

Despite using means to prevent the deer from eating his yard, Kinney has had no success in stopping them. He said damage has been done to his neighbors’ yards as well.

Deer have chewed off the hostas of Rodney Kinney all the way to the stub. The deer have invaded his yard and decimated his plants.

But Kinney had enough. He contacted Council member Steve King about the problem. Now, the Austin City Council is considering a special archery deer hunt in the city limits during which council members voiced favor for at a Monday meeting.

The city reached out to Jeanine Vorland, an area wildlife supervisor for the Minnesota Department of Natural Resources, for advice.

“Deer can have ecological effects on their own habitat if their populations get too large,” she told the Council.

“Anytime you try to do ecological preservation, deer can be damaging,” Reese said at the Monday meeting.

However, other cities have conducted special hunts when deer populations grew too large. 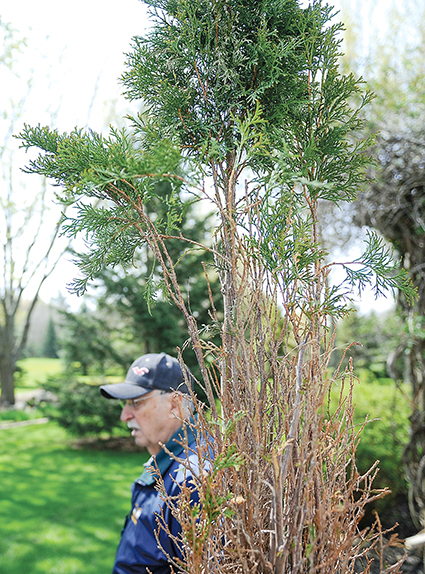 Rodney Kinney walks past a bush, well over six feet tall that’s been eaten away nearly to the top by deer.

According to Vorland, all hunters must have permits given to them by the city. The city must decide how many permits it will distribute and acquire them from the Minnesota Department of Natural Resources.

Hunters may only bag five deer and are only allowed to use bows and arrows.

Vorland suggested the city hold a hunt every year in order to control the population, and perhaps make the herd more leery of humans.

“It breaks their behavior that humans are not to be feared,” she said, noting deer can become too comfortable over time with people.

She added that taking a break for a year between hunts is OK, but she warned that any longer could make deer feel safe to approach residences again.

Some concerns over a city hunt were also expressed at Monday’s Council meeting.

“Personally, I believe the Nature Center and Todd Park are the only areas within city limits large enough to have a hunt,” said Austin Police Chief Brian Krueger.

However, many of the deer issues are taking place in southwest Austin, far from the Nature Center and Todd Park.

There was also concern about hunting on private property, particularly along the banks of the Cedar River.

Council member Jeff Austin also pointed out that a special hunt was unsuccessful in 2010, when only six deer were bagged.

The City Council will vote on approving a special hunt at its next meeting. In the meantime, the city will determine the parameters and number of hunting permits to distribute.

“I think that would be a good idea,” Kinney said about the proposed hunt. “You’ve got to manage that herd somehow.”