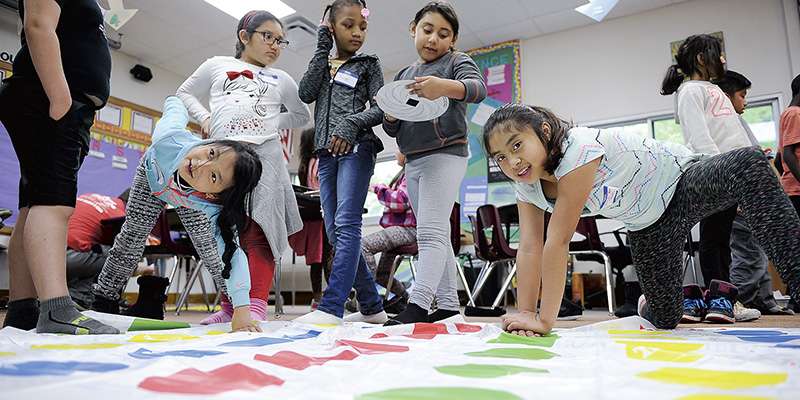 Sumner Elementary second-graders play Twister Friday morning as rain kept them inside rather than go outside for recess. Photos by Eric Johnson/photodesk@austindailyherald.com

The weather on Friday was gloomy, with steady rain falling outside the windows of Sumner Elementary School.

But inside, second-grade students in Jordan Pline’s class were having “recess” nonetheless.

In one area, students were playing the game Twister, trying to keep their balance and giggling when one or two — or all — would fall.

In another corner, students were walking on a line of low plastic blocks, a child’s version of a balance beam.

Still others were jumping, not unlike crossing rocks in a stream, from colorful block to colorful block, trying to keep their balance.

The items come in what is loosely called “a cart,” a compilation of items that provide physical activity inside the building.

It is also an example of why the school earned a place on the Alliance for a Healthier Generation’s 2017 list of America’s Healthiest Schools and achieving its Bronze Award.

The honor comes for making changes that promote healthier eating and physical activity for students and staff.

“It’s huge,” said Maureen Noterman, the school’s social worker, who applauded work by students and staff, as well as the district and school’s wellness committees. “We’re only one of 368 schools nationally” to earn the award. “We are very honored.”

This award was granted by Healthier Generation’s Healthy Schools Program, an evidence-based national initiative to create healthier school environments where children can thrive, according to a school district press release.

Principal Sheila Berger said a number of changes were made, from having a “Work-out Friday” once a month and promoting healthy foods, to more emphasis on physical education and health education, especially in nutrition.

Sumner has an active wellness committee that plans family involvement activities including family fitness and activity nights. Additionally, water stations and water bottles for all students were added this year to encourage drinking water.

Noterman said while the district has its own standards for better nutrition, Sumner added some practices, such as providing non-food rewards. 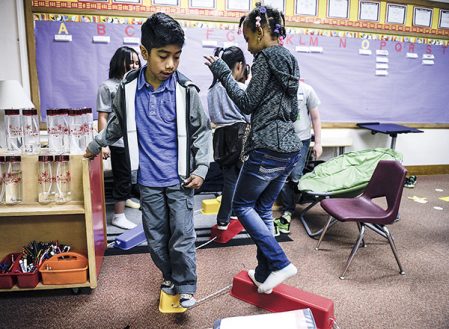 Sumner second-graders Edwin Rojas and Kiana Andersen walk across small balance beams Friday morning as a way to stay active in place of being stranded inside because of rain.
Eric Johnson/photodesk@austindailyherald.com

“Instead, we might give them an extra recess, or stickers,” she said.

Staff also agreed not to eat or drink unhealthy snacks or sodas  in front of the children.

“As a staff, we recognized that we model good nutrition,” she said.

The items that Pline’s kids were using are contained in one of two “carts” purchased for the school, to be used on rainy or wintery days when going outside for recess was not recommended.

The items not only provided a physical activity for students, they provided a chance for kids to be creative, as several began making up stories as they negotiated some of the items.

The items got a glad reception by the students.

Pline surveyed the room, a grin on his face.

“I like that they are up and active. These are great,” he said, pointing to the new items.

Noterman said that physical activity translates to not only healthier children, but happier children.