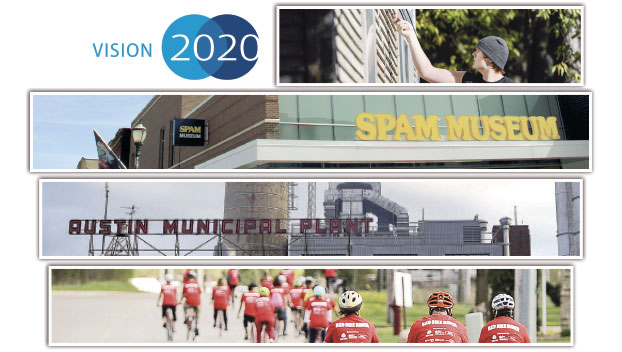 Photos show various projects with ties to Vision 2020 from the last five years, including, from above: the Community Home Improvement Project, the Spam Museum, the downtown Austin Municipal Plant, and Red Bike. Vision 2020 will celebrate its fifth anniversary from 6 to 8 p.m. Thursday at the Spam Museum. Herald file photos

This year marks five years in Austin for Vision 2020.  Started in 2012, the project has aimed to improve the community while maintaining an outlook on the future.

“The biggest goal was trying to get more people involved in the future direction of the community,” said Greg Siems, who has been the director of Vision 2020 since 2015. “We wanted to try to engage people in that development process and find out what their needs and wants and interests were so we could create an organization that would allow them to carry out those visions and make Austin a better place to live.”

Vision 2020 will celebrate its five-year anniversary by throwing a party at the Spam Museum from 6 to 8 p.m. on Thursday. The event is open to the public, and Siems encourages everyone to attend to learn about and get involved in Vision 2020.

Ideas were submitted by the community in 2011 and were then categorized into committees. There are currently eight active committees associated with Vision 2020:

•Biking and Walking — connecting the community with a safe, integrated bike/walk trail system. This committee is responsible for the Red Bike Program, which allows residents and visitors to borrow a red bike to ride around town.

•Business and Economic Development — positioning Austin as the region’s center for entrepreneurs.

•Community Pride and Spirit — creating a positive community spirit. This committee was a driving force behind the creation of the Community Home Improvement Project (CHIP), which assists low-income households with home repairs.

•Community Recreation Center — creating a year round recreation center. This plan has arguably drawn the most interest of any Vision 2020 plan, as the YMCA and Vision 2020 are partnering with help from the city of Austin to build a rec center at the former downtown Austin Utilities Plant. According to Siems, Vision 2020 has exciting news about the recreation center that will be announced at a press conference in the coming weeks.

•Gateway to Austin — representing the community identity and attracting visitors.

•Waterways — cleaning and maintaining all waterways and shorelines.

“Each committee is really passionate about what they are working on,” Siems said.

Since 2012, Vision 2020 committees have leveraged over $24 million in grants, donations and in-kind services for projects aimed at improving Austin’s quality of life, according to Vision 2020.

But Siems also pointed to partnerships as a key benefit.

“They’ve created momentum throughout the community for identifying problems or challenges and coming up with ways to solve them,” he said. “We’re connecting individuals and organizations and agencies that might not have worked together before. That’s been a real benefit.”

Siems noted the city of Austin and The Hormel Foundation have been generous with their time and support for projects.

Hormel Foundation Chairman Gary Ray called Vision 2020 a successful vehicle for its efforts to support Austin and the community, adding it’s provided a way to engage the community and focus that energy on specific, significant projects.

“We’re very pleased with what Vision 2020 has accomplished and we look forward to its continued contributions to Austin and Mower County,” Ray said in a press release.

“Austin is a much stronger community because of the important work of Vision 2020,” Clark said in a press release.

“Local government depends on engaged and active residents participating in the public process,” Clark said in the release. “The committees have leveraged countless volunteer hours and financial resources to advance critical projects that would normally be beyond the capacity of the city to accomplish alone.”

And that work is far from completed. Although 2020 is in the name, Siems says Vision 2020 is meant to go well beyond that.

“The work of community development is never done and the way the visions were crafted in the beginning, there really isn’t an end point,” he said. “These are all ongoing necessary things that demand the community’s attention.”

Vision 2020 leaders see the Spam Museum at 101 Third Ave. NE as a fitting place to hold the fifth anniversary celebration, calling it one of the “crown jewels of the Vision 2020 process.”

Vision 2020 proposed relocating the museum downtown, and the new museum opened in April 2016, attracting more than 125,000 visitors in its first year.