18-year-old charged for sleeping with 14-year-old 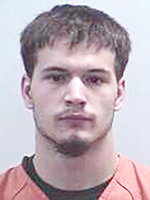 An 18-year-old Austin man is facing charges for allegedly sleeping with a 14-year-old this spring.

According to court records, someone spotted text messages between Bigelow and the victim indicating they’d had sex.

When interviewed by police, the girl told police she and Bigelow had sex twice.

Bigelow initially denied the allegations, but then admitted they had sex twice, adding he thought she was 15.