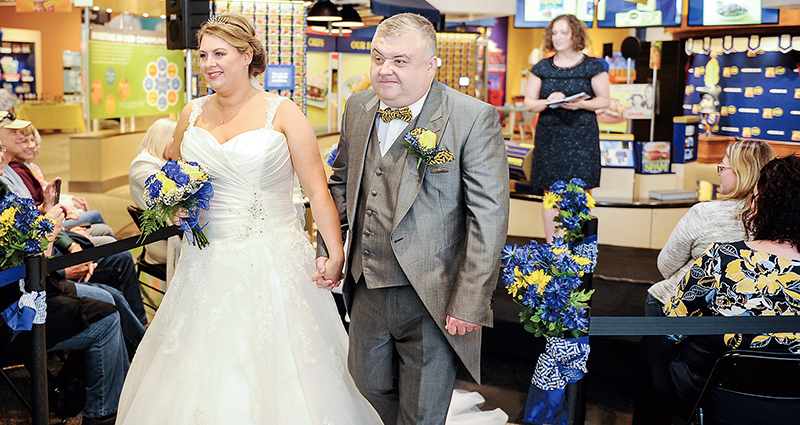 Mark and Anna Benson walk down the aisle after they were married Tuesday morning at the Spam Museum. Photos by Eric Johnson/photodesk@austindailyherald.com

When one is thinking of words to describe the Spam Museum, “wedding venue” probably does not come to mind.

But on Tuesday, visitors entering the museum were treated to balloons, flowers and a makeshift aisle. In the back were tables holding appetizer trays and a wedding cake.

Mark I Love Spam Benson — yes, that is his legal name — of Liverpool, England, United Kingdom, married his girlfriend Anne Mousley in a ceremony at the Spam Museum. The ceremony was attended by their daughters, Milly and Evie, and officiated by Spam Brand Manager — and Spaminister — Jaynee Sherman. 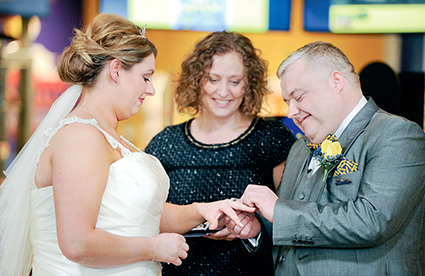 “Love, commitment and constant adjustment are the three qualities that make a good brand manager and a good marriage,” said Sherman, who became an ordained minister to conduct the ceremony.

“People ask me, what does Spam mean to me,” Benson said during the couple’s vow exchange. “Today, it means: ‘Special Princess Anne Mousley.’”

After the ceremony, guests were treated to an appetizer table featuring Spam recipes, such as musubi (Spam sushi) and Spam doughnuts. 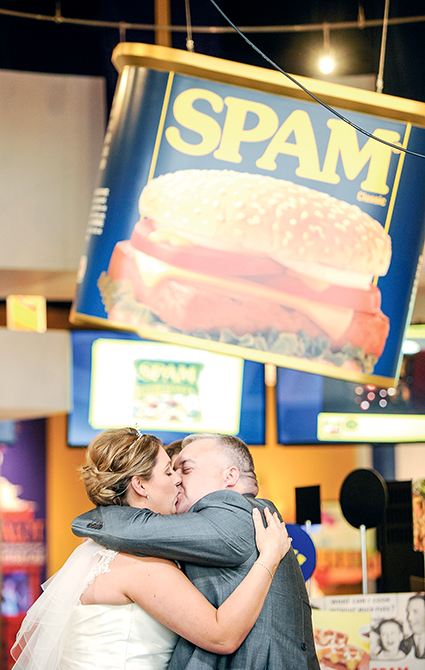 Mark and Anne Benson kiss after they exchange vows during a wedding ceremony at the Spam Museum Tuesday morning.

Mousley, who had never tried Spam before meeting Benson, came up with the idea to have the wedding at the Spam Museum.

“Mark’s always loved Spam and when we learned that they had reopened the Spam Museum, he said, ‘We ought to go there one day,’” Mousley said. “So I reached out to the Spam Museum to see if we could join up for the wedding.”

Sherman said she was honored at the request.

“We have been working with Mark over the past 10 years,” she said. “He had been attending events for us in the United Kingdom and had been doing media outreach in the U.K. and has been a great advocate for the Spam brand. We were very excited when Anne reached out to us and asked if we would consider doing a Spam Brand wedding in their honor.”

Mousley announced to Benson on Valentine’s Day that they were having the wedding at the Spam Museum. 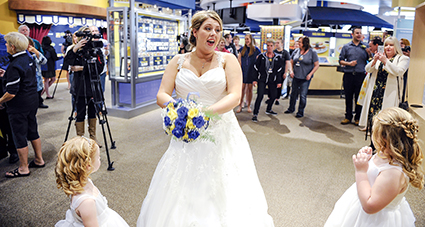 Benson prepares to throw the bouquet after Tuesday’s ceremony.

Mousley admits she does not love Spam as much as Benson, but she is not far behind.

“As a little girl, I never thought I’d have Spam at my wedding reception,” she said.

Benson’s love of Spam can be attributed to the influence of his grandfather.

“My granddad fought in World War II and he used to swap rations with the Americans,” he said. “The Americans would give him Spam. Since then, it has always been in the household. My granddad went to work where they made Spam, and that building is now the supermarket where I buy my Spam today.” 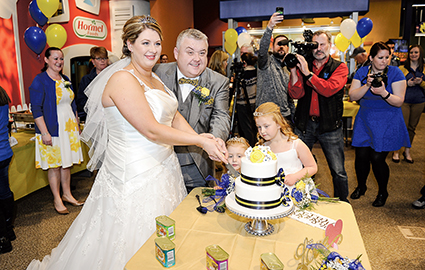 Mark and Anna Benson with daughters Evie and Milly are photographed as the couple cuts the wedding cake Tuesday morning at the Spam Museum.

“I feel it is a fitting tribute to my granddad,” Benson said of his name change.

Benson said he plans to stock up on cans before he leaves and is particularly excited about trying the jalapeño flavor.

“I wish we had more variety in the U.K. because we only have three flavors over there,” he said. “We have the normal classic, the low sodium and the black pepper flavors. To see all of these other flavors is a dream come true.”

For Benson, the wedding could not have been better.

“I love Anne, and to have the wedding here at this special place is fantastic,” he said.

The couple, along with their daughters, will be heading to Honolulu, Hawaii for their honeymoon to attend the 15th annual Spam Jam. 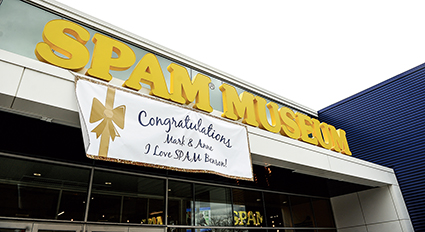 A banner congratulates Mark and Anne Benson at the Spam Museum, where they were married Tuesday morning.