Sullivan: Have confidence and write what you love 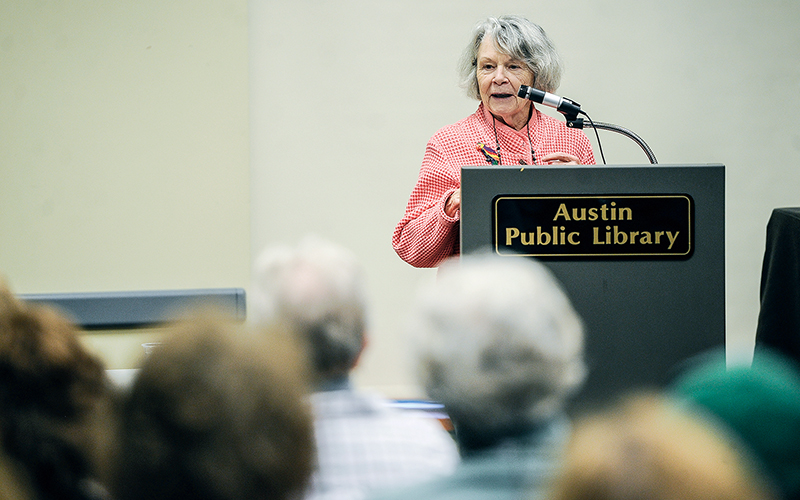 Author Faith Sullivan admitted that publishing books these days can be daunting.

Unlike the days when she was first publishing her books, today’s publishing world is more difficult, less confident of its authors and too often chooses “books by committee.”

“It is a less happy” world, she told an audience of about 100 who gathered to hear Sullivan speak and whose book, “Good Night, Mr. Wodehouse,” was this year’s Austin Page Turners Community Read book.

“To see how difficult it is for them [first-time authors] is a heartache,” she said. She noted that too many publishing houses use groups of editors who may all offer input on one book — leaving the author often confused and making changes so often that the true book never emerges. A good editor will allow the book to come forth.

“Everyone is different,” she said. “One editor may like one thing; another may like something else. But that’s why I don’t like ‘books by committee.’ It can be a mess; everyone wants something different and the author ends up trying to please everyone.”

Despite those challenges, she urged authors to stay strong and write about what they are passionate. Some authors, she added, choose to self-publish, although she said it is an option that can be very expensive.

“You have to have that sense of confidence and forget about ‘how to do it the right way.’ Don’t lose faith.”

Sullivan spoke for an hour, talking about her love of reading, and her characters in her writing.

She began to write when she was in her 40s, and once she realized how much she loved it, “I was almost sad; I had wasted all those years.”

She has come to realize, she said, that “writing books is such a privilege; … it’s a whole other life, a chance to play God, for heaven’s sake. It’s the only time you can make people do what you want them to do!” she said, raising chuckles from the audience. 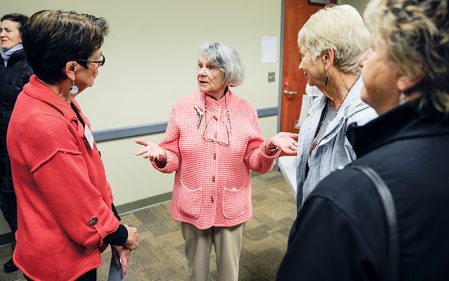 Sullivan said she loves her characters; if one has to die, “I actually weep,” she said, “even with the villains,” she added with a chuckle. She also talked about being sad when she finished writing about her characters, adding she finally worked it out in her head to believe that the characters “had just moved across the country … they had just moved — just far away.”

Creating a story is a talent she appreciates more as she grows older.

“And readers are so dear; the extraordinariness of the whole idea of books and reading!” she exclaimed. “A book is only half there until it is read. And no one person gets the same thing out of the same book. It’s astounding! Everyone’s view is different.”

Her love of reading led her to choose author P. G. Wodehouse as her character’s favorite author — also a favorite of Sullivan’s — to “add some lightness” to a book that is filled with challenges for its heroine, Nell Stillman. She also took 10 years to write her book, which covers 60 years of Nell’s life, “because I really wanted to get it just right,” in tribute to Wodehouse, who was known to create complex plots and was “a master stylist,” she said.

She was shocked, she said, to find out she had won the Langum Prize for Historical Fiction for “Good Night, Mr. Wodehouse.”

“Me!” she exclaimed, noting that she wasn’t a true fan of history when she was young. But she found later the panel had chosen her work because the plot and history were so closely woven that the progression of time and the story was seamless.

Sullivan is the author of seven books and lives in Minneapolis. She continues to meet with authors in her own book club (“Women Who Wine”) and for 20 years has mentored young authors. She is the winner of several awards, including the Midwest Book Award, the Ben Franklin Prize, and the Milkweed National Fiction Prize. She is in the midst of writing her next book.

Sullivan enthused about her time in Austin and thanked the Page Turners for their invitation and hospitality. She was amazed, she said, at the wealth of people who turned out to listen to her.

“I haven’t seen anything like this,” she said of the group. “This has been such a great day, filled with such warmth and extraordinary people. I think I will move here.”