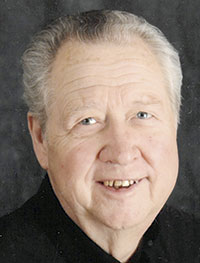 He was born May 4, 1938, in Owatonna, Minnesota, the son of Harvey and Helen (Perrine) Johnson. Phillip was a graduate of New Richland High School. On Feb. 11, 1961, he married Sharon Vaith. The couple had three children, Craig, Cindy, and Michele. The couple later divorced. Phillip served in the U. S. Army Reserve and worked in Owatonna with the Kirby Company. Later, he owned and operated Kirby Vacuum Service in Austin. He married Helen Noble on Oct. 20, 1984, in Austin. After his retirement, he drove Winnebagos and other vehicles around the country.

Phillip is survived by his wife, Helen of Austin; his son, Craig (Kim) Johnson of Bono, Arkansas; his daughters, Cindy (Rich) Voss of Owatonna and Michele (Nate) Bunce of Oak Grove, Minnesota; eight grandchildren; a brother, Herb (Karen) Johnson of Manila, Philippines; and a sister, Shirley Harris of Owatonna. He was preceded in death by his parents; and his sisters, Mavis Chapman, Betty Werch, and Norma Seabloom.

A memorial service will be held at 1 p.m. on Friday, April 21, 2017, at Cornerstone Church with the Rev. David Simerson officiating. Friends may call from noon to 1 p.m. on Friday, immediately preceding the service at the church.  Interment will be in Berlin Cemetery, Ellendale, Minnesota, at a later date. Military honors will be performed by American Legion Post 91 and VFW Post 1216.

Worlein Funeral Home of Austin is assisting the family with arrangements. Condolences may be expressed to the family online atwww.worlein.com.