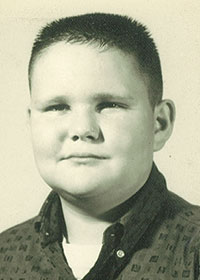 Pete was born on Feb. 8, 1948, in Minneapolis and was adopted by Casper Winkels and Blanche (Belshan) Winkels, on Dec. 21, 1949. He attended Austin Catholic Schools and graduated from Pacelli High School in 1966. Pete was a very proud member of the Boy Scouts where he became a member of the Order of the Arrow. He often spoke with fondness of his time spent in the Boy Scouts at Luck, Wisconsin.

Pete loved spending time at the Winkels’ family cabin on Sand Pointe Lake in northern Minnesota and enjoyed hosting several friends there over the years. It was there where he would learn to swim and fish and later would teach his children and grandchildren to do the same.

He also had a fondness for fast cars and won many trophies drag racing at Brainerd International Raceway.

Pete went on to fight for his beliefs as the union business agent during the P-9 Hormel strike in 1985. He was not called back to work at the Hormel plant and would later find rewarding work at the Sheriff’s Boys Ranch and Espeland Van Service. He enjoyed making a positive impact in people’s lives and seldom left people without a smile. His witty humor and vast library of quotes and facts were second to none.

Later in life Pete would spend 17 wonderful years with his special friend, Rita Stahl, and loved spending time with her and her children, Jessie and Ian. It was during that time when his two grandchildren were born, Amanda and Noah (Jeremy) Winkels. They were truly the light in his eyes. There was nothing in this world he would rather do than spend time with them; teaching them about life, laughter and love. He especially liked teaching them some of his unique shenanigans, “Guess What. Chicken Butt.”

Pete had a very strong Christian faith and was a devoted Catholic who could be seen regularly at any one of the local Catholic churches for Sunday Mass. It was his faith, family and friends that would give him comfort until the end.

Pete Winkels was a great man and the world is a better place for having him in it. His like may never be known again and he will be sorely missed by all who have known him.

He is survived by his daughter, Jennifer, Duluth, Minnesota; his sons, Jeremy, Duluth, and Michael, New Brighton, Minnesota; and grandchildren, Amanda and Noah, Duluth.

There will be a funeral Mass at 1 p.m. on Saturday, April 29, at Queen of Angels Catholic Church in Austin. A “Celebration of All Things Pete” will follow at 3 p.m. at the Austin VFW.