Packers pour on the runs against Wingers 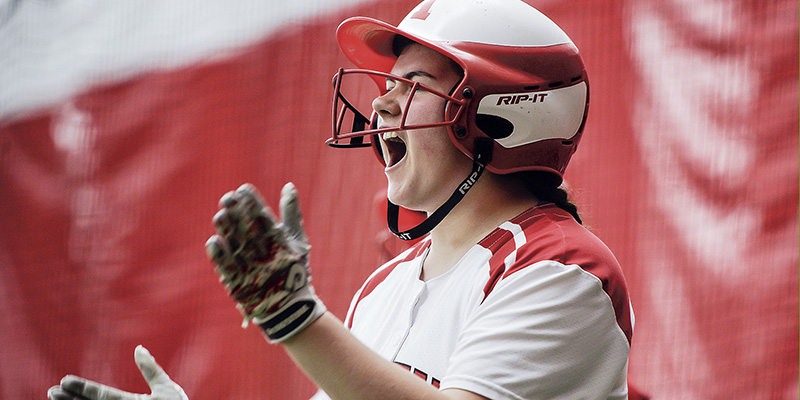 Austin’s Hannah McMasters celebrates after her and Adison Medgaarden scored against Red Wing Tuesday under the dome at Wescott Athletic Complex. Eric Johnson/photodesk@austindailyherald.com

The Austin softball team came up with one of its most explosive offensive performances in a long time when it racked up 13 hits in an 18-9 win over Red Wing in the Dome at the Wescott Athletic Complex Tuesday.

The Packers (3-6 overall, 1-5 Big Nine) jumped out to a 6-0 lead in the first inning when Halie Retterath knocked in a key two-run single, but the Wingers (2-6 overall, 1-5 Big Nine) bounced back by scoring seven runs in the second inning to take a 1-0 lead. Austin didn’t flinch after the early Winger onslaught as the Packers came back and scored five runs in the bottom of the second to go back up 11-7. 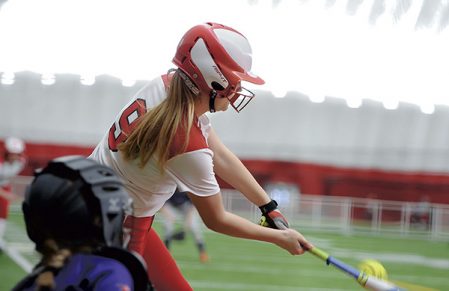 “I feel like we knew we could get back in it with them,” Walters said. “We didn’t really worry and we just kept our heads in the game.”

Austin sophomore Jenna Braaten went two-for-three with a double and four RBIs in the win. She said the Packers came out ready to play and the team was glad to get its first Big Nine win of the season. Austin will have a chance to keep that momentum as it will host Rochester John Marshall 5 p.m. Thursday and it will host Byron 5 p.m. Friday. 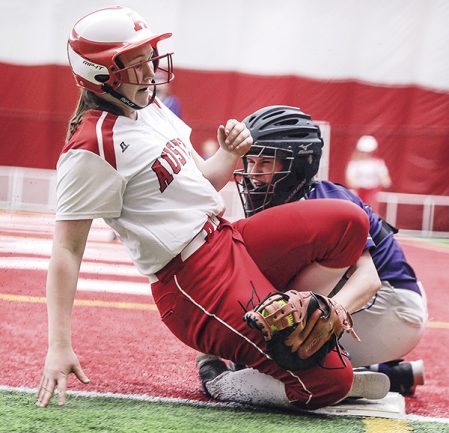 “Right off the bat we were really positive,” Braaten said. “We were timing the pitcher before our at bats and we came out ready. We were aggressive. I think we really needed a good win in our conference to get us going. Starting off the week like this will help us Thursday and Friday.”

The Packers started four players that were sophomores or younger on Tuesday, but they showed how much they’ve picked up as they bounced back from the early Winger rally. Freshman Jordyn McCormack went two-for-five with a triple and two runs and sophomore Hannah McMasters went three-for-four with a double and three runs. 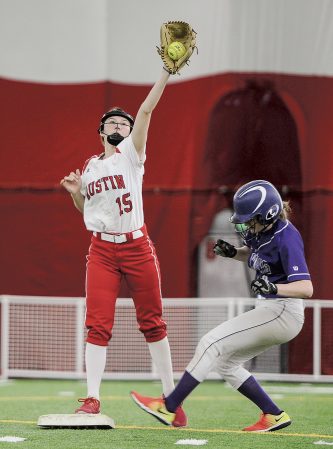 Austin’s Jordyn McCormack reaches up for the ball to get the force out Tuesday against Red Wing under the dome at Wescott Athletic Complex. Eric Johnson/photodesk@austindailyherald.com

Austin head coach Al Eckmann is hoping to see more offensive outbursts like the team had on Tuesday.

“I don’t know the last time we scored 18 runs. It’s something we can do. We’ve got some kids that can swing the bats,” Eckmann said. “Our practices have been better and they’ve been more intense. We need to work and that shows up in the games now. We’re so young and we’re hoping to learn that what you do in practice is what you do in the game.”

Austin’s younger players have made some adjustments this season, but mostly they’ve grown more comfortable at the next level. Braaten said it took a little while before she felt at ease.

“At the beginning it was tough going to varsity, but the older girls have helped us a lot and Eckmann has been really good,” Braaten said. “We’ve been working hard in the cage.”

Walters as had to make a huge adjustment for the Packers as she not only has had to play at a higher level, she’s had to play on a new team. Walters moved to Austin from Iowa this past summer, but she’s been making plenty of progress in the softball diamond this spring for the Packers. 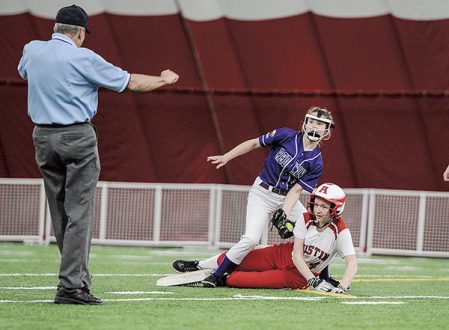 “It was kind of nerve racking at the start of the season, especially being new to the school,” Walters said. “But the girls made it easy for me to get right at it.”