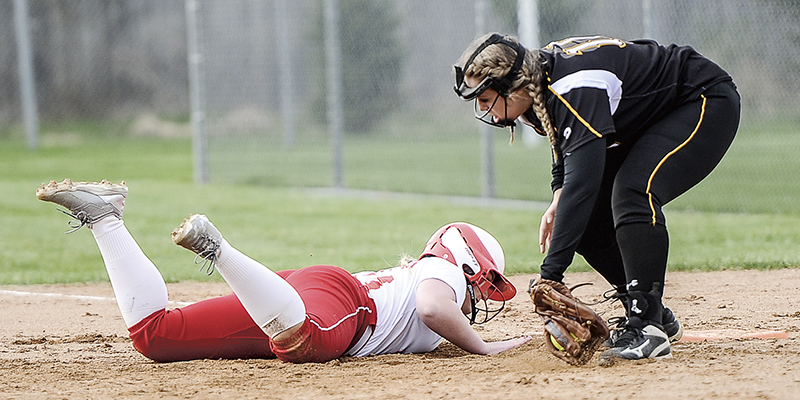 Austin’s Caitlin Kaercher dives back into first ahead of the tag of Byron’s Karley Bale Friday night at Todd Park. Eric Johnson/photodesk@austindailyherald.com

The Austin softball team took advantage of an early Byron mistake to pick up momentum as it beat the Bears 5-1 in Todd Park Friday.

Austin (4-7 overall) jumped out to a 2-0 lead in the bottom of the first inning when it scored two runs on a passed ball after Kyra Walters had struck out with two outs. Austin went on to build that lead up to 4-1 in the fifth when Walters doubled in a run and Taylor Derry hit a sacrifice fly. 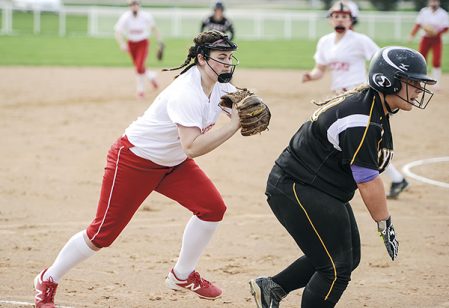 Austin freshman Jordyn McCormack went three-for-three with a double and two runs in the win as she continues to build up her confidence.

“We started off really strong and that kept us going the whole game,” McCormack said. “I was kind of nervous at first on varsity, but I”m getting used to it. It’s easy to play with them because they’re all so welcoming.”

Austin junior Adison Medgaarden snapped out of a hitting slump for the Packers. After striking out in her first at-bat, Medgaarden rattled off three straight hits, including an RBI single in the seventh.

“The mindset was key, having confidence at the plate was really a big part of it,” Medgaarden said.

Austin head coach Al Eckmann said that Medgaarden and McCormack have both been key as the Packers have improved over the season.

“Those two are doing a great job,” Eckmann said. “It’s a pleasure to have Jordyn with us and I think we got Adi’s swing straightened out today.” 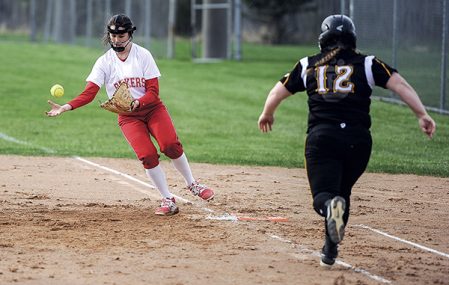 Austin’s Jordyn McCormack wrangles in the ball to get the force on Bryon’s Hannah Mueller Friday at Todd Park. Eric Johnson/photodesk@austindailyherald.com

Austin junior Hannah Rasmussen picked up the pitching win as she allowed zero earned runs and walked just two. The Bears (4-6 overall) had eight hits, but Rasmussen was able to pitch out of every jam.

“Hannah had her best outing of the year and she was really zipping it in there,” Eckmann said. 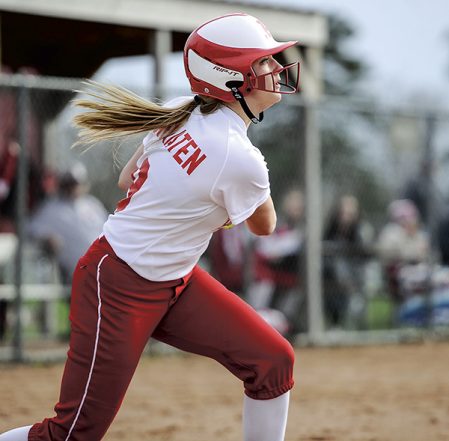 Austin’s Jenna Braaten watches a flyball off her bat against Bryon Friday against Byron. Eric Johnson/photodesk@austindailyherald.com