Packer softball team gets a split against Spartans 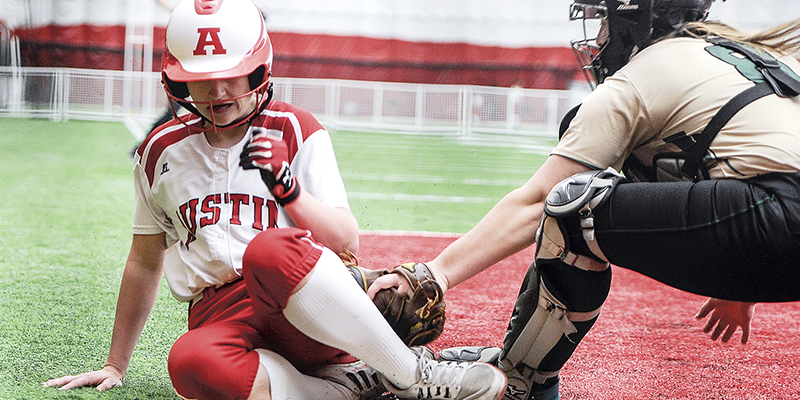 Austin’s Adison Medgaarden scores past the tag of Rochester Mayo’s Ashley Wandler during game one of a doubleheader Tuesday afternoon. Eric Johnson/photodesk@austindailyherald.com

The Austin softball team was able to pick up a split in a doubleheader against Rochester Mayo when it lost the opener 7-2 and it bounced back to win the nightcap 5-1 Tuesday.

Austin junior Tori Gardner made her pitching debut of the season in the win as she struck out eight in seven innings. Gardner was able to pitch out of several jams as the Spartans left the bases loaded in the third and fifth innings without scoring a run in either frame. 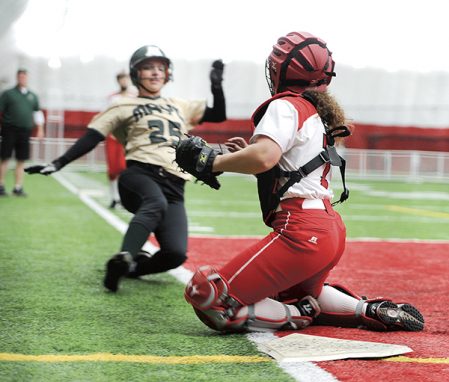 Austin catcher Courtney Kusick gets in front of Rochester Mayo’s Madisyn Carroll on a play at the plate Tuesday afternoon. Carroll was called out. Eric Johnson/photodesk@austindailyherald.com

“I’m very competitive,” Garnder said. “We wanted to get that second game real bad. It was exciting.”

The Packers (5-8 overall, 1-7 Big Nine) took a 3-0 lead in the third inning of the nightcap when Adison Medgaarden hit a two-run homer over the left fence. The homer was Medgaarden’s first of her varsity career.

“It felt great to get it in a close game,” Medgaarden said.

“Tori came in and battled hard in her first chance,” Austin head coach Al Eckmann said. “She’s been wanting to get in there and hopefully she can keep going now.”

The Spartans (2-5 overall, 2-3 Big Nine) opened the first game with a blast as they scored three runs in the first inning. Sarah Lisko, who also struck out 11 in the circle, hit a two-run homer to get Mayo started. 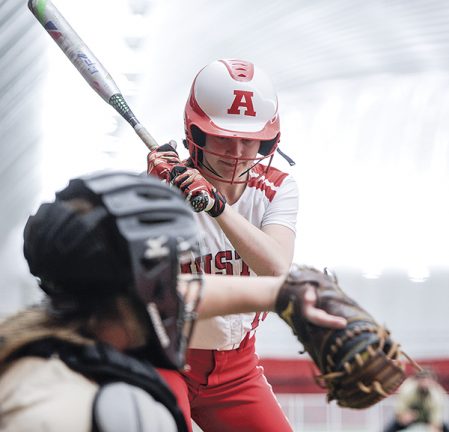 Austin’s Tori Gardner watches the ball in during an at-bat in game one against Rochester Mayo Tuesday. Eric Johnson/photodesk@austindailyherald.com

“We got off to such a bad start in the first game and we couldn’t catch up,” Eckmann said. “They had a pretty good pitcher too. In the second game we played hard, we got some runs and we got some big outs. That’s the way we’ve got to play.”