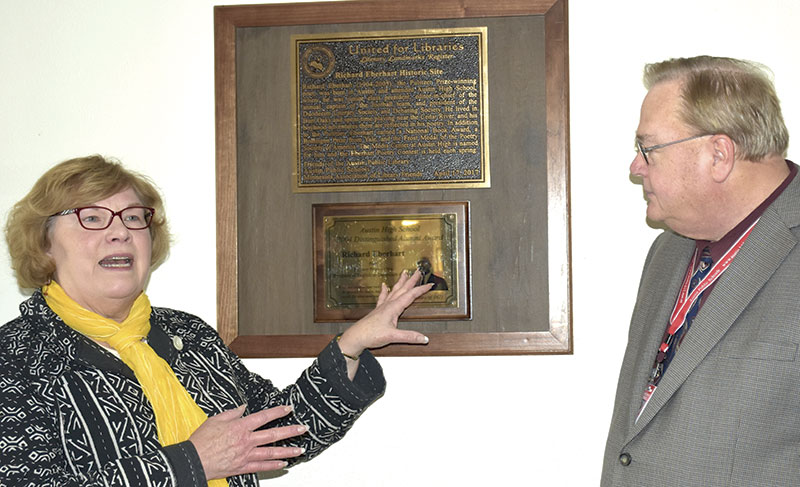 Friends of the Library President Sue Grove of Austin, left, discusses the Literary Landmark that pays tribute to Austin native and Pulitzer Prize-winning poet, Richard Eberhart. At right is Austin Superintendent of Schools Dave Krenz. The item, located in the foyer of AHS, was unveiled Monday.

Some in the community, explained Sue Grove, wondered why the plaque, which was unveiled and dedicated Monday in the lobby of the school, “didn’t get put somewhere else,” such as the public library.

There was good reason, said Grove. Eberhart was something of a star while at Austin High School — fertile ground, it seemed, for his future endeavors.

Grove, president of the local Friends of the Library, is also a board member of the Minnesota Association of Library Friends and spoke at the dedication of the landmark.

Austin High School partnered with Friends of the Austin Library and the Minnesota Association of Library Friends for the unveiling.

Eberhart was active both academically and in activities.

The 1921 AHS graduate was head of the school’s literary society, captain of the football team, president of the junior class, and played saxophone in the orchestra. 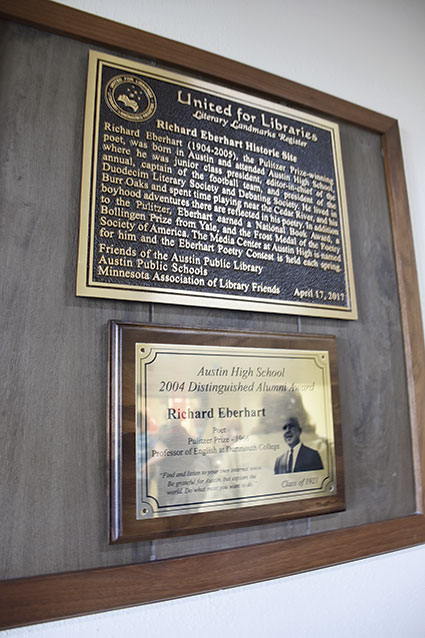 He eventually went on to teach at Dartmouth College — and, of course, wrote poetry that today stands as some of the world’s best.

The plaque outlines his life and awards, and includes a Distinguished Alumni honor plaque, presented in 2004. It is located on the south wall of the foyer into AHS, directly across from the attendance office.

Grove read his poem, “This Fevers Me,” in tribute to Eberhart:

“This fevers me, this sun on green,

On grass glowing, this young spring.

The secret hallowing is come,

In growth, yet subtly veiled in all,

In flowers, and in the human heart …”

Judy Schotzko, president of the Minnesota Association of Library Friends, said Austin should be proud to be home of only one of seven Literary Landmarks in Minnesota, and 160 in the U.S.

Superintendent Dave Krenz thanked the Friends of the Library for their work and spoke of the pride of having such a distinguished alumni.

AHS Principal Katie Baskin agreed, happy that with this recognition, one of the most distinguished of AHS alumni “continues to live and breathe here. With our [Richard Eberhart named] media room, and our poetry contest, our students know Richard Eberhart. Our alumni who visit are proud to call Austin home.”

Others on hand to offer congratulations were MALF board members Debby Frenzel, who is on the Library Landmark committee for the association; and treasurer Kim Edson.

School Board member Don Leathers was also on hand, as was John Alberts, executive director of Educational Services.