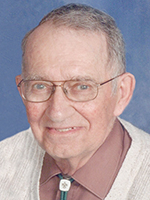 John was born April 20, 1935, on the family farm near Little Cedar, Iowa, the son of Herbert and Agnes (Goergen) Mayer. He attended school and graduated from Visitation Catholic School in Stacyville, Iowa, in 1953. He served with the U. S. Army from Dec. 10, 1957, to Sept. 11, 1959. John was united in marriage to Darlene Jensen on Sept. 16, 1961, at Queen of Angels Catholic Church in Austin, Minnesota. He worked for White Farm in Charles City, Iowa, and Armour in Mason City, Iowa.

On June 12, 2000, John received the gift of a new heart from Blake Johnson, which gave him the opportunity for more memories and time with his family. He was a troop leader for Boy Scout Troop 62 and a member of the Knights of Columbus, Catholic Order of Foresters and the Osage Veterans of Foreign Wars Post 7920. John enjoyed camping, baking cobbler, collecting owls and lambs, and was a fan of the Chicago Cubs, Minnesota Twins and Minnesota Vikings.

He was preceded in death by his parents; father- and mother-in-law, Tommy and Sophie Jensen; grandson, Thomas Mayer; sisters, Donna Mueske and Shirley Hackenmiller; and brothers-in-law, Kenny Williams, Ernie Hackenmiller and Melvin Hackenmiller.

A funeral Mass will be held at 10:30 a.m. Saturday, April 22, 2017, at Sacred Heart Catholic Church in Osage with Father Raymond Burkle officiating. Burial will be at Sacred Heart Catholic Cemetery in Osage with military honors at the grave by Osage VFW Post 7920. Visitation will be from 5 to 7 p.m. Friday at the Champion-Bucheit Funeral Home in Osage, with a Knights of Columbus Rosary at 6:30 p.m.