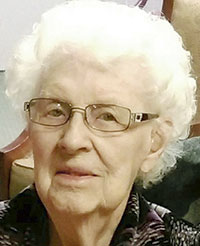 Irene Evelyn Nelson was born Dec. 14, 1918, in Haynes, North Dakota, to Hans W. and Agnes (Peterson) Nelson. She attended school in North Dakota and moved to Minnesota in 1940. On Dec. 9, 1945, Irene was united in marriage to Bernhard Fahje in Lyle, Minnesota. The couple had four children. Irene worked at the bank in Lyle and was a member of Our Saviors Lutheran Church in Lyle. Irene was famous for her delicious homemade dill pickles, and she loved her role as homemaker, wife, mother, and was lovingly referred to as “clean Irene” by her family. She enjoyed sewing, crocheting, embroidery, and playing cards. Irene treasured the many trips she was able to enjoy with her daughters. Her grandchildren and great-grandchildren were the love of her life.

Funeral services will be held at 11 a.m. on Friday, April 21, 2017, at Our Saviors Lutheran Church in Lyle with Pastor Joel Guttormson and Pastor Steve Woyen officiating. Visitation will be held from 4 to 7 p.m. on Thursday, April 20, at Worlein Funeral Home in Austin, Minnesota, and one hour prior to the service at the church on Friday. Interment will be in Woodbury Cemetery, rural Lyle.