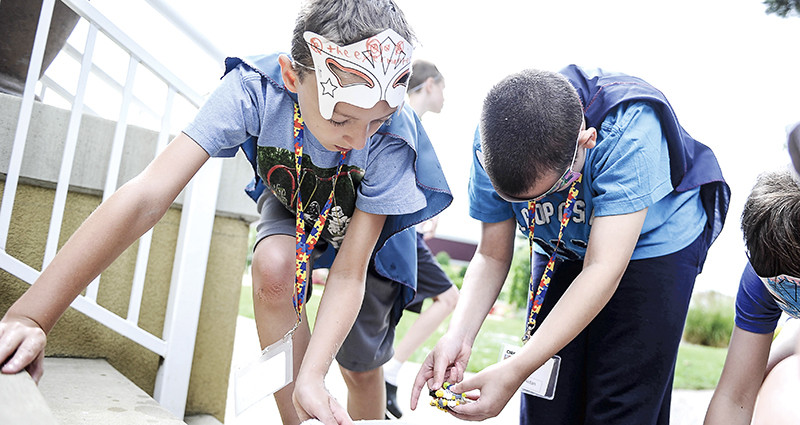 Bradan Klauer, left, and Aidan Sweet clean off their found superheroes as they themselves are dressed in capes and masks during the Circle of Friends Daycamp at the Hormel Historic Home. -- Eric Johnson/photodesk@austindailyherald.com

For six years, the Hormel Historic Home has been a place for children on the autism spectrum to come together, have fun and get an authentic camp experience.

On Sunday, that programming schedule will kick-off its seventh year with the Stepping Out for Autism Walk marching out at 1 p.m. from the HHH.

The HHH held its first camp, Circle of Friends Day Camp, in 2010.

The camp was for elementary aged kids and was so successful that in the following year All Access Community Explorations was introduced for kids in sixth grade through 12th grade.

After a few more years, a third camp was introduced in 2015. Just for Me was created for children with autism that require more individual attention.

Each camp is designed to create a social experience that is filled with fun and, of course, learning and advancement.

“Kids with autism don’t necessarily have those [camp] experiences, so first and foremost they want this to be fun and then they are implementing the goals for progress for the campers,” Johnson said.

Those measurable goals are done through the United Way, a major funder of the camps.

“They are measured on communication, how well they interact with their peers, how well they transition to a new environment,” Johnson said. “That’s a sensitivity to kids on the spectrum. Kids going to a new place can be a very stressful situation.”

Volunteers work with campers to meet those goals and progress while at the same time insuring these kids have fun.

That’s why the three camps have become so integral to the community. The different levels of interaction help children across the spectrum who have different autistic traits.

A good example is the more recent of the three: Camp Just for Me.

Campers taking part have a wide range of needs and present more challenges on the way to meeting those goals.

“Some of those kids are non-communicating,” Johnson said. “They tailor that very specifically to them.”

Part of the challenge of making people more aware of those dealing with autism is simple recognition both for parents with children who have been diagnosed and the community around them. 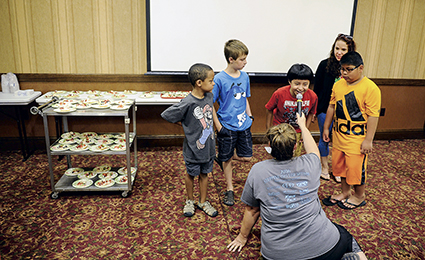 Campers at the Circle of Friends Camp tell other campers what they made for lunch last year at the Hormel Historic Home.

That recognition needs to start early.

“The key to someone with autism is to get them diagnosed as early as possible so they can start receiving services,” Johnson said. “Sometimes they are coming in and they haven’t seen any services whatsoever. They haven’t even been to a speech specialist or a behavior specialist.”

With some of those kids, the challenge is further complicated when English isn’t the primary language.

“We have a diversity where sometimes English isn’t their first language,” Johnson said. “That’s a challenge. That’s where we can utilize the success coaches in the schools.”

The third challenge can just be getting the word out of what resources are around them and getting them into work places.

“We’re not recreating the wheel, we’re not doing anything revolutionary,” Johnson said. “We’re just trying to open people’s eyes to simple things that can be done for their businesses, for their services and also their people.”

While the challenges are there and very much real, Johnson, camp volunteers and the community are all seeing the fruits of those labors.

Sometimes that’s something as simple as just going out to eat.

“We hear from parents that they’re more enthusiastic about going to a new location,” Johnson said. “They remember that they’ve gone to Steve’s Pizza every year. That’s worked out, maybe they can try another restaurant. More willing to go to new places and try new things.”

“Our next goal is to make the community much more aware and accepting of the needs of adults with autism, because they can be employed,” Johnson said.

With all of the success the camps are producing though, Johnson and staffers recognize the continued and ever-present need. As the camps continue to add more resources, like a music therapy arm that’s new this year through a partnership with MacPhail Center for Music, the need remains.

“In my opinion, [in] the future, as long as we have people funding, we can do anything,” Johnson said.