For many overbooked Christian families, Wednesday is the new Sunday

Each Wednesday, the Latzke family heads to their Bloomington church for an evening of religious education and a worship service. Sunday is too packed to squeeze in church, so now Wednesday is their day — as it is for thousands of busy Minnesotans.

“Wednesday is the new Sunday,” is what some clergy call this trend reflecting the scheduling quirks of modern families.

“This works really nice for us because we’re so busy on weekends,” said Robyn Latzke shortly before the service at Transfiguration Lutheran Church. “She dances, and she plays volleyball,” Latzke said, pointing to her daughters.

“And I farm on weekends with my brother,” added her husband, Jeff Latzke.

As churches across Minnesota try new ways to accommodate the hectic lives of the faithful, Wednesday night services have emerged as a popular option.

For churches that already offered religious education on Wednesdays, adding a worship service was a logical fit. For others, a Wednesday service helps folks who travel on weekends, hold down jobs, or schlep children to hockey, soccer and other events.

“The on-demand culture has affected church people as much as society,” said Scott Thumma, director of the Hartford Institute for Religion Research.

Keeping folks in regular attendance is critical, as irregular churchgoing often fizzles into no churchgoing, Thumma said. Mainline Protestants, those most avidly embracing Wednesdays, have seen a steady decline in attendance. Median weekend attendance at U.S. churches, for example, dropped from 129 people to 80 from 2005 to 2015, according to the institute. The study advised: “To grow, distinguish yourself from other congregations.”

Wednesday nights at Transfiguration are much like those at other churches, starting with a meal, then worship, then religious education. Sue O’Reilly is among the regulars. The nurse was among those seated at tables in the social hall, enjoying lasagna and a salad.

“I’m a busy weekender, going to the cabin, sometimes working,” said O’Reilly. “Coming on Wednesday, I get a full church service.

The Rev. Ed Treat said the church was targeting adults like O’Reilly as well as teens when it began the Wednesday “Oasis” in 2015.

“We were trying to solve the problem of getting kids to church on a Sunday morning,” said Treat. “We were teaching them confirmation, but they never came to worship.”

The service now is one of the most popular, he said.

“People are starting to see it as their own service,” Treat said.

Abby Titus, a seventh-grader sitting with O’Reilly, appreciates the night. Said Titus: “It’s kind of like a break from sports and homework and from the rest of the world.”

Churches began experimenting with Wednesdays about a decade ago. It has steadily grown since then.

Mount Olivet’s Wednesday worship, kicked off in 2007, exploded to become the church’s largest service with up to 300 people, he said. In recent years, attendance has leveled off to about 150 to 170 people. Erickson attributes the drop to even more traveling sports teams and school events.

Wednesday worship is not just an urban trend. The Detroit Lakes United Methodist Church started a Wednesday service that was specifically “child-friendly,” but also appealed to hospital workers, shift workers and the many weekend travelers. It’s been a tremendous success. 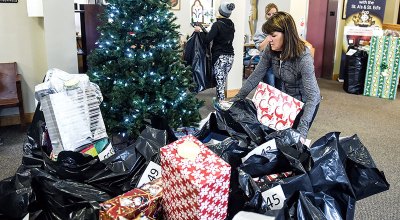