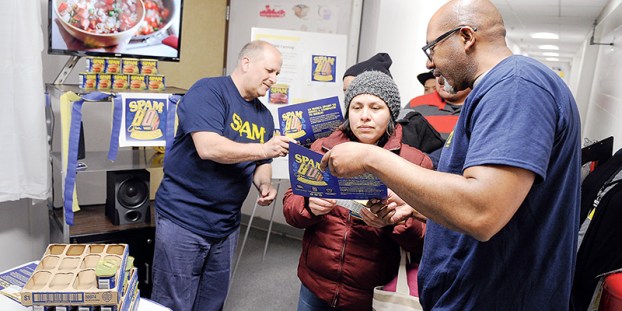 Eighty Days of Spam begins with — Spam. Lots of Spam

Hormel Food Corp. kicked off its 80th anniversary of the creation Spam on Friday by giving a can of the now-famous meat to each of its employees.

Called the “Eighty Days of Spam,” the next few months will see various contests for employees and the public to celebrate the landmark year. 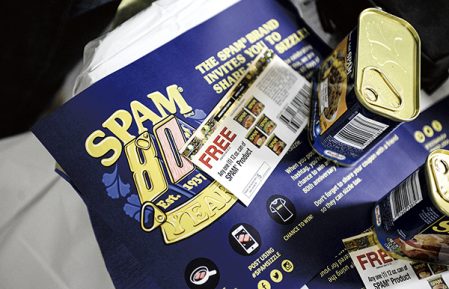 Employees were given cans of Spam, coupons and other items in celebration of Spam’s 80th anniversary. Eric Johnson/photodesk@austindailyherald.com

On Friday, however, it was all about that can of Spam — or rather, cans.

“We started at 4 a.m. and we’ll be here until 6 p.m.,” said plant manager Clint Walters with a grin, as he passed can after can to employees coming off one of the plant’s many shifts. “It’s been a fun day.”

The employees will also have a chance to enter a photograph of themselves frying some Spam in a “Sizzle to Win” contest; once they turn in a photo, they become eligible for prizes. A similar sweepstakes will be held for the public beginning on May 1. That contest will run through Oct. 31.

There will also be an 80th celebration at the Spam Museum on July 7. Those activities will be announced closer to the celebration.

The luncheon meat was introduced on July 5, 1937, and according to the company website, achieved an 18 percent market share in its first year.

Walters said it was a particularly special day since “it all started right here, right here in Austin, Minnesota — and we have a vested interest in seeing that it continues to succeed.”

Bridging the projects; Summer roadwork is right around the corner

By Michael Stoll and Jason Schoonover It’ll be a passing of the baton for bridge projects this summer as the... read more