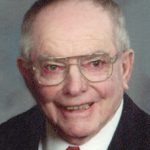 A memorial Mass will be celebrated at 10:30 a.m. Saturday, April 29, 2017, at St. Peter’s Catholic Church in New Haven with Father Mark Murphy officiating and assisted by Deacon Michael Helfter. There will be a time for luncheon and fellowship following the services in the church hall. Inurnment will be at St. Peter’s Catholic Cemetery, with military honors by the Osage VFW Post 7920 and Osage American Legion Post 278.

Don was born Nov. 18, 1926, in Ogden, Utah, the son of Lorenz and Bernice (Gilles) Helfter. The family moved back to New Haven when Don was 4. He graduated from St. Mary’s Academy in 1944, then served in the U.S. Navy, as a radarman, until 1946.  Following his service, he worked for his father and uncle in the grocery and feed business and began raising turkeys with his father. Don was united in marriage to Marilyn Reed at St. Augustine Catholic Church in Austin, Minnesota, on April 7, 1947. Don raised turkeys and farmed until his retirement. He served as president of the Iowa Turkey Growers Association and on the Osage Co-op Elevator Board.  Don was a member of St. Peter’s Catholic Church in New Haven. He was active with the Knights of Columbus, attaining the rank of 4th Degree Knight, and with the Catholic Order of Foresters. He was a proud member of the Osage American Legion Post 278 and Osage VFW Post 7920. Retirement years included wintering in San Diego, California, where he walked 8 miles a day and escaped the Iowa winters. Don attended many of his Navy reunions and maintained several strong friendships with former shipmates. He enjoyed collecting turkey-themed china, Wild Turkey canisters and many other turkey items. Don played baseball as a young man and was a lifelong fan of the Yankees and Cubs and, later, the Twins. He greatly enjoyed the 2016 season. Don’s greatest joy in his last years was seeing his grandchildren and great-grandchildren. Greatly surprised to make it to 90 years, he said, “I’ve had a good run.”